The New York Law Journal reports today on a list of Marc Dreier’s assets compiled by Mark Pomerantz, the receiver appointed by the court to “locate, recover and safeguard” whatever Dreier and his firm had left out of the $400 million allegedly taken from investors.

Dreier was the single equity partner in the now-defunct Dreier LLP, a situation that, as the ABA Journal observantly opined, posed some risk for the other 249 lawyers in that firm.  See “Single-Equity-Partner Structure Poses Risk, Says Magazine,” Lowering the Bar (Dec. 10, 2008).  One such risk: the single equity partner may be a crook.  Dreier is charged with defrauding investors by selling them more than $700 million in bogus real-estate and pension-plan notes.

I had assumed that Dreier intended to use any profits from this scheme solely for the public good, but it appears that he treated himself to a few items as well.  According to Pomerantz, who has been combing through documents and interviewing former employees of the firm, Dreier and/or his LLP owned, in addition to the expected attorney trust account and other bank accounts:

• more than 300 works of art allegedly worth nearly $39 million;

• three homes worth in the neighborhood of $15 million;

• a 37-meter yacht worth more than than all the homes put together ($18 million), which has five cabins and is “luxuriously equipped with flat-screen televisions and a wine collection”;

• two watches valued at $11,000 (combined, presumably, unless they are nuclear-powered);

• and law firm accounts receivables and work-in-progress from Dreier LLP. 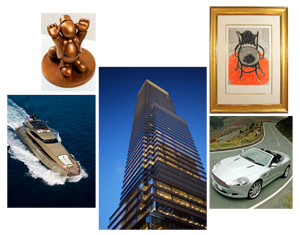 Don’t get too excited about that last item, as the value of “work-in-progress from Dreier LLP” has likely declined somewhat.

Nor is the value of the artwork entirely clear, based on the picture of selected Dreier loot (left) provided by the NY Law Journal, which shows (1) an etching of a chair with a hole in it and (2) a bronze sculpture vaguely resembling Ziggy.  On the plus side, though, the sculpture appears to depict a person putting up his hands while being robbed, which seems appropriate for something found in Marc Dreier’s office.  I would pay a fair amount to own that particular sculpture, although in this case “fair” still means “not very much.”

I would be willing to ante up something more for that yacht, depending on the size of the TVs and whether or not it has an all-female crew of trained assassins.  I would change the name, though, from the current Lady Seascape, which is just horrible.  I think Floating Indictment has a nice ring to it.