As I wrote last year (here, and here), since 1849 the Kentucky Constitution has required anyone holding any "office of honor or profit" to swear that they have never fought or otherwise participated in a duel. This provision was added because existing anti-dueling laws had failed to put an end to the practice, common among offended gentlemen of the day, of resolving disputes at gunpoint.  The idea was to deter dueling by threatening the future political career of anyone who engaged in a duel (assuming his future career had not already been derailed by a bullet).  To this day, anyone entering public office — or simply taking the oath after passing the bar exam — must affirm that they have never dueled.  But that may be about to change. 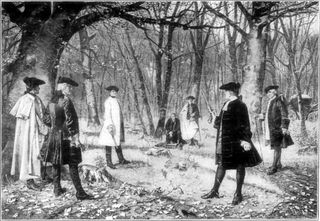 When discovery disputes were still resolved with pistols at dawn.

Kentucky Rep. Darryl Owens (D-Louisville), who is an attorney himself, has introduced a bill that would remove the dueling language from the state constitution, and so presumably from the statutes reflecting that provision.  Owens said he was sponsoring the legislation partly because the language is "archaic" and needs to be updated to make it relevant to our modern society, and partly because it is embarrassing to have people laughing while taking an oath of office.

"The laughter as a result of the dueling language, in my opinion, detracts from what should be a solemn and important occasion," said Owens at a House committee meeting.  He suggested in particular that forcing new governors to swear that they had not fought any duels could contribute to negative stereotypes about the state.  Republicans also agreed that the amendment was a good idea.  "When we take that oath," said one, "it's serious business.  It's just not appropriate to have the snickers."

As of March 10, the proposal had been given its second reading in the House.  If it passes the House and Senate, it will then go on the ballot in November.  Voters must approve any amendment to the state constitution.

According to a constituent survey posted on Rep. Owens' site, 81% of respondents favored removing the dueling language, suggesting that 19% are concerned about a possible dueling resurgence, or possibly that they just enjoy the snickers.