Let's all shed a tear, shall we, for Terry Nichols, who is not only serving a life sentence for conspiracy and manslaughter in the Oklahoma City bombing but is also subjected to a diet unconstitutionally low in fiber.

That's what Nichols argued, at least, in a lawsuit he filed last year alleging that the food at his current residence in Florence, Colorado, is so bad that it constitutes cruel and unusual punishment and, in an interesting twist, violates his right to free exercise of religion.  Nichols apparently contended that he was entitled under the First and Eighth Amendments to a diet rich in whole grains, fiber, and raw fruits and vegetables.  According to the report, the free-exercise claim argued that the unhealthy food had forced Nichols to violate his own religious beliefs by "causing him to sin."  I haven't seen the complaint yet, but if this was some version of "my body is a temple" then Terry should be even more ashamed of himself, if that is possible. 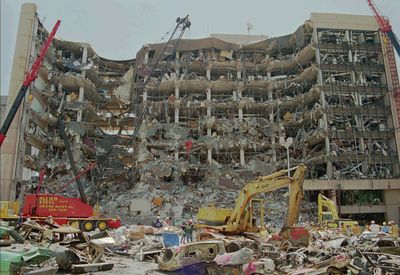 Did we save any of the rubble?  Maybe he can eat that.

U.S. District Judge Christine Arguello dismissed Nichols' claims on Monday, probably without losing any sleep over the result.  It's too bad, in a way, because this lawsuit would have established a couple more constitutional rights that we could then take for granted, but I guess we will have to keep not paying attention to the ones we sort of still have.

I am fairly sure that a number of cases have already (and unsuccessfully) raised a similar issue with regard to "nutraloaf," which I understand to be a nutritious but thoroughly unappetizing concoction (described here as "a witches' brew of nutritious semi-digestibles") that some prisoners are served, created by just throwing a bunch of stuff together and baking it into a "loaf."  That sure sounds nasty, and I don't know how much fiber it contains, but as long as it is edible and sustains life it doesn't seem "cruel and unusual."  (At least one court has ruled that serving it constitutes "punishment," though, and indeed that is often the purpose.)

Hey, if you would prefer to have your events catered by Wolfgang Puck, don't help somebody blow up a building.

San Francisco Manages to Spend $700K for a Wheelchair Ramp