Everybody wants God on their side, but über-polygamist Warren Jeffs is apparently getting legal advice directly from Him.

Jeffs, who is the leader of the Fundamentalist Church of Jesus Christ of Latter Day Saints (FLDS), is on trial in Texas for what he describes as "celestial marriage" though the attorney general calls it "raping a 12-year-old." Seven other FLDS men have already been convicted of various child-marrying-related crimes, and Jeffs would probably have been convicted by now too except for his habit of firing lawyers to slow things down. He's had seven attorneys in the last six months, two of whom lasted less than a week. In a last-ditch effort to get another delay, he fired his defense team just before trial Thursday, and asked to be allowed to represent himself and that the trial be delayed so he could prepare.

Yes to the first, the judge said, but no delay. "Mr. Jeffs," she said, "the court is not going to recess these proceedings to let you go to law school." The joke's on her, though, because he's getting advice directly from somebody who's already fully accredited.

Jeffs didn't make an opening statement, nor did he say anything during the first several hours of evidence against him, which as you can see in this courtroom sketch apparently included the letter T. 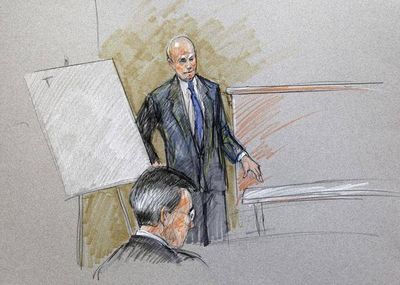 On Friday, though, he was suddenly inspired to object as an FBI agent testified about evidence seized during a 2008 raid. The objection – which seems to have invoked a "sacred-trust privilege" – then turned into a speech defending polygamy. The judge gave him some leeway because he had made no opening statement, but eventually overruled his objection. Jeffs then brought out the big guns, saying she had left him no choice but to "read a statement from God."

Personally, if I knew God was going to speak in my defense, I'd probably mention that during my opening statement. Jeffs didn't explain why he had held back – did God need Thursday to prepare? – or why God had chosen to testify through a written statement. (Especially since Jeffs apparently has a habit of stopping in mid-sentence, cocking his head as if listening to something, and then repeating what God has allegedly just told him.) But at least the statement was fairly dramatic, if a little ungrammatical.

"I, the Lord God of Heaven," Jeffs read on God's behalf, "call upon the court to cease this open prosecution against My pure, holy way." Otherwise, He/he/It/They continued, "I will send a scourge upon the counties of prosecutorial zeal [apparently Tom Green County, Texas] to make humbled [sic] by sickness and death." The judge, who had excused the jury before letting Jeffs read, told Jeffs that if he threatened the jury in any way he would be removed from the courtroom.

He didn't, but he did freely object for the rest of the afternoon, so much so that the judge finally took his microphone away.

It'll be interesting to hear what God writes up in response to the evidence that the prosecution promised in its opening statement, which allegedly includes pictures, audiotapes, DNA, and other evidence seized from Jeffs' ranch and car. The prosecutor told the jury that the DNA would prove that Jeffs was the father of the 15-year-old girl's baby, and that they would hear an audiotape of Jeffs raping the 12-year-old. Jeffs should probably ask God to show up personally after that tape is played, and maybe bring Johnnie Cochran along with him, because he's going to need that kind of firepower.