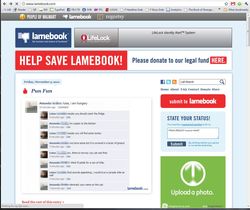 TechCrunch reports that Facebook, Inc., which apparently operates some sort of social-networking website, has been sued by Lamebook, LLC. Lamebook, which accepts and reposts funny and lame stuff users come across on Facebook — that is, it's sort of the FAILBlog of Facebook — is seeking a declaratory judgment to head off a potential lawsuit from the bigger entity.

Lawyers for Facebook have been going after companies that use "-book" in their names, such as Teachbook and Placebook, and have recently been leaning on Lamebook. In the declaratory judgment action, Lamebook argues that it is a clear parody of the Facebook site, which would protect it from the charges of infringement and trademark dilution that Facebook has been making against Lamebook in cease-and-desist letters.

So, if I understand correctly, Facebook is mad that a company has created a website that is made up almost entirely of content that somebody else created and which is copyrighted by those people, content to which the company adds virtually no value of its own but then does use for its own profit without paying the copyright holders and possibly without even telling the copyright holders it's doing so. Because Facebook thought of it first?

You can contribute to Lamebook's legal defense, or just post something lame, at www.lamebook.com.

No Seat-Belt Citation for Corpse

Note to Self: “What Happens in Vegas, Stays in Vegas” May Not Be Legally Binding