Those who hate fun scored a victory on Tuesday, and not just those in the Republican Party. Way at the other end of the political spectrum, the San Francisco Board of Supervisors voted 8-3 to ban the inclusion of toys in Happy Meals and similar offerings unless the meals are constructed to the liking of those eight supervisors. Meals must be low in things that are Bad and must also contain a specified amount of fruit and vegetables before the dastardly child-attracting toy device may be employed.

According to the report, one of the supervisors who voted for the measure said that the "powerful lure" of such toys and related advertising campaigns "puts parents who may want to steer their children toward healthier food choices at fast-food restaurants at a distinct disadvantage." So even though parents may know better, they must bow to the will of the child, who is in turn compelled by the toy. What are they putting in these Happy Meals, the Rings of the Nazgul? 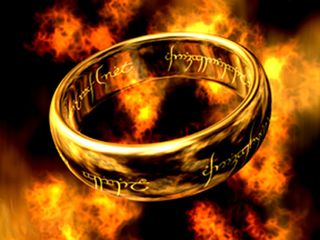 One Toy to rule them all, One Toy to find them
One Toy to bring them all and to McDonald's bind them

Unsurprisingly, a McDonald's franchisee said he was very disappointed with the legislation. Actually, he said "[i]t would be an understatement to say how disappointed I am with the legislation," which I guess means his disappointment is infinite because he could never successfully state how disappointed he actually is. This caused him to overreach a little, I think, when he argued that the ban would cause consumers to "cross the San Francisco border for a traditional Happy Meal experience." I wouldn't worry too much about that — marijuana is still illegal here but it seems to be getting into the county somehow.

Complaining that fast-food chains put so much effort into marketing burgers, Supervisor Bevan Dufty said the vote was meant to encourage them to diversify. "I think we can take [sic] a bold move here," he said, "and say, you know what, you really need to think about the fact that you can market whole-wheat products, you can market carrots." He appeared to be entirely serious when saying this. "If you have to put a Shrek doll with a package of carrots," he continued, "maybe that's what you have to do."

I have a feeling that if you put a Shrek doll with a package of carrots, you would have some kids with Shrek dolls and a lot of carrots thrown out in the street. But I might be underestimating the power of The Precious.