This is pretty far off-topic, but I got interested in it for possibly obvious reasons, so I will go ahead and mention it.

The government has issued a statement saying that it doesn't know what this thing was, but that whatever it was, there's nothing to worry about: 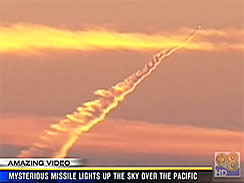 Move along, nothing to see here

Spotted west of Los Angeles ﻿﻿by a news helicopter last night, it sure does look like a missile (there is video at the link above), but every military base in the area and every government agency that CBS contacted said they didn't know anything about any missile. Which did not stop CBS from reporting it to be a missile, or at least a "mystery missile."

According to the statement by U.S. Northern Command, it is "aware of the unexplained contrail reported off the coast of Southern California yesterday evening" — which is good, because I think that's the sort of thing they are supposed to be aware of — and had concluded it was not a threat. "At this time," the statement continued, "we are unable to provide specific details but we are working to determine the exact nature of this event. We can confirm that there is no indication of any threat to our nation and we will provide more information as it becomes available." This prompted some to wonder how they knew it wasn't a threat if they didn't know what the god-damn thing was.

Well, they didn't quite say that — they said they could not yet "provide specific details." The details they might be collecting might relate to a theory that this was not a missile launch at all, but rather a jet contrail that is at a sufficiently weird angle that from some angles it looks vertical instead of horizontal. This site has pictures of prior examples of this phenomenon and even some geometry. This is certainly the most likely explanation I've seen so far (and also explains why the video does not show a bright flare near the tip of the contrail).

Of course, it could just mean the guy who posted that is part of the conspiracy.