Bad enough that Google Maps allegedly caused a woman to be hit by a car because its route told her to walk along a highway and failed to warn her that said highway posed certain risks (namely cars). Now it has been accused of causing, or at least complicating, an international incident after Costa Rica said Nicaraguan troops had used Google Maps to "justify" crossing the border. 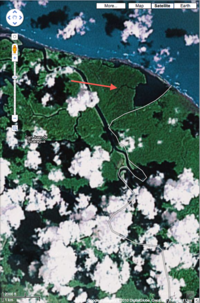 Costa Rica's main newspaper quoted the Nicaraguan commander as saying Google Maps proved they were legally in Nicaraguan territory. Roughly translated, he said: "If you see the Google satellite photo, you will see the border [the white line in the picture to the right]. In the last 3,000 meters [i.e., of the river], both sides are Nicaraguan. It's clear that from El Castillo [where the white line hits the river] on, then the border is the right bank." Apparently, the Nicaraguans had crossed the river as shown, and this guy was citing Google Maps to support his claim to the territory under international law.

Google has since admitted its map is not accurate, though it blamed the U.S. government for giving it bogus data: "[after talking with the] data supplier for this particular border (the U.S. Department of State), we determined that there was indeed an error . . . [of] up to 2.7 kilometers. The U.S. Department of State has provided a corrected version and we are now working to update our maps." As this site shows, the official maps of both Costa Rica and Nicaragua agree that the area belongs to Costa Rica, so by taking advantage of Google's error the commander was just being a wise guy.

As noted, Google is blaming the feds for the mistake, but as the blog search engine land pointed out, Bing gets it pretty much right (although it is also not perfect):

It therefore appears that Costa Rica does have a valid case here. What it doesn't have is an army, which is probably why the commander felt brave enough to stroll into another country in the first place. But the legal process should be able to resolve this dispute (again), partly because no matter how far you zoom in on this area, it does not really look worth shooting or getting shot over.