This warning sign appears inside the men's bathroom in the city hall of Chandler, Arizona: 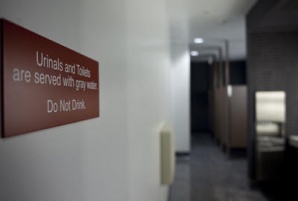 Urinals and Toilets
are served with gray water.
Do Not Drink.

According to the Arizona Republic, Chandler has a brand-new city hall that incorporates environmentally friendly features, one of which is the use of recycled "gray water" from the cooling system to flush urinals and toilets. This article on gray water stops short of saying that it is actually poisonous, but says you shouldn't drink it because although it has been processed, "it's still technically sewage." So if you are bothered by what the article calls "that pesky fecal matter," you should avoid drinking gray water.

If that's the kind of thing that bothers you, of course, you are not likely to need a sign to warn you not to drink out of the toilet. The mayor of Chandler, Boyd Dunn, did not seem quite sure why the sign was there. "I'm certain there's some regulation out there that requires that type of sign," he said, and by "that type" I'm guessing he meant "stupid." And that is entirely possible. Another city official was quoted as saying that the building code requires that color be added to gray water so people know not to drink it, and that an exception was requested for City Hall's urinals and toilets. Apparently whatever authority handles such things refused to grant the exception unless the warning signs were posted as an alternative.

It's not clear from the article whether a similar sign is posted in the women's restroom, although I would not be surprised to find out that they, at least, were presumed to know better.