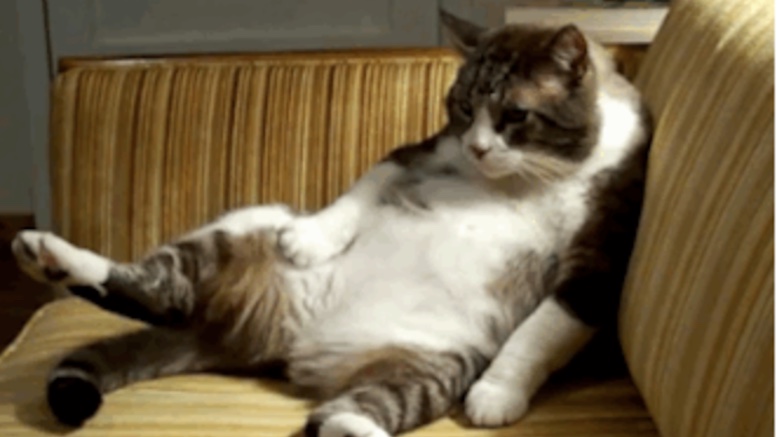 Not this cat, but probably one just like it

I’ve written several pretty long posts recently and have more of those in the pipeline, so today it’s this instead:

Paramedics called to the scene who checked the man found his vital signs to be normal. But they noted that he was displaying odd behavior—crawling around on the floor, randomly using profanities and calling the family cat a “bitch.”

That is odd, because a female cat is generally referred to as a “queen.” Some sources say “molly” or “dam,” but “bitch” is only used with canines and otters, as far as I can tell. But perhaps he was using it informally, in the sense of “a difficult or unpleasant thing,” often but not always female at least in aspect. That’s my working hypothesis, anyway.

The questionable usage may have been influenced by the 53-year-old Omaha man’s recent consumption of pot brownies, which he found in the back seat of his car while unloading groceries and assumed were regular brownies. They were not. The odd behavior began not long after he ate four of them.

He must have mentioned the brownies to his wife, who remembered that the couple’s adult children had used the car earlier that day, and put two and two together. She tried to call them to ask what exactly was in the brownies, but called 911 after she was unable to reach the kids. One of the latter showed up at the house, though, after police had arrived. According to the report, he “told officers the brownies belonged to his siblings” and that he was “pretty sure” the brownies only contained marjiuana. Based on that confident assessment, his father declined to be taken to the hospital and went to bed instead. Police said the investigation had closed without charges, so the siblings appear to be off the hook, at least as far as the cops are concerned.

First, the next subsection of that statute makes it illegal to “knowingly and intentionally tease or harass” an animal, but only if it’s working with law enforcement, and there’s no evidence this was a police cat. These laws are rarely enforced anyway. See “Charges Dropped Against Woman Arrested for Making Faces at Police Dog,” (June 7, 2007) (noting that prosecutor decided it would be difficult to prove faces affected dog’s behavior); but see “First Amendment Doesn’t Guarantee Freedom to Bark” (July 26, 2011) (noting court’s holding that even if First Amendment applied to barking directed at police dog, barks would constitute unprotected “fighting words”).

UPDATE: The Omaha World-Herald has this followup today with more details, including that the “Pot Father,” as the column refers to him, remembers seeing flying geometric shapes and denies that he intended to insult the family cat. At this point, everything seems to be fine.