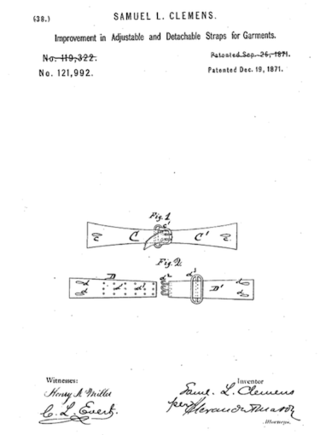 Actually, although it does look like a bra clasp, which is what this report assumed it was, the Patent and Trademark Office says that Clemens' idea was for a device that could be used to take in shirts. But it was also used for women's corsets and, in some fashion that's not clear to me, underpants.

The PTO says Clemens was awarded two other patents, one for a "self-pasting scrapbook" and the other for a history trivia game of some sort. He also wrote some books, probably so that he would not be remembered as "the guy who invented adjustable underpants."

McCain Sued by Jackson Browne Over Use of “Running on Empty”

Still Not Working: Fake Kidnapping to Avoid Wrath of Girlfriend