Normally, if you felt it was necessary to take out an ad to tell people you were still alive, it'd be safe to say that business wasn't going well. This is probably the one exception to that rule: 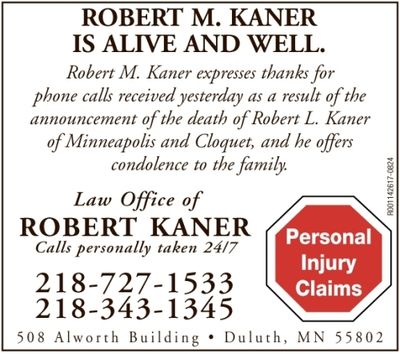 The two Kaners are from the same area, are roughly the same age, went to the same law school, started out practicing law at the same public defender's office, and were even members of the same synagogue. So it was not too surprising, said Robert M., that many of his friends and clients started calling him after hearing that "Robert Kaner" had died. (He also said that yes, they were "somewhat shocked" to hear his voice.)

He got so many calls, he said, that he was worried he'd start losing business. "All those calls from concerned clients and friends," he said, "led me to believe I should announce that I am alive and still practicing law in Duluth." (It is tempting to say that the clients might have been checking to see whether they needed to pay their bills, but I'm sure that's not true.) And as long as you're putting an ad in the paper, you might as well include your contact info and line of work, just in case anybody needs a lawyer. Robert M. also offered condolences to the family of Robert L., as you can see, so it wasn't all business.

Still, if you would like to hire Robert M. Kaner, who is alive, he can be reached as shown above.