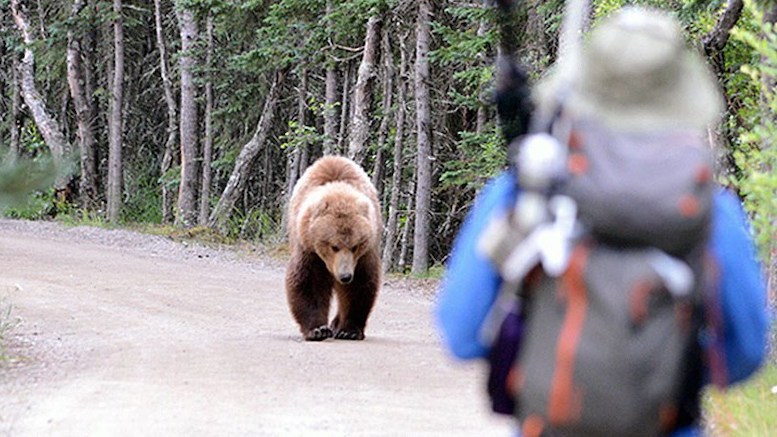 It’s too bad Clyde Gardner gave up on his first plan for killing his ex-girlfriend, because step one involved an encounter between him and a bear. Most likely, no one would have had to bother with Clyde Gardner any more after that.

There would have been a couple more minor tasks for the bear, I suppose.

Last week, Gardner was sentenced to 5 to 15 years in prison for plotting to kill his ex-girlfriend after an acquaintance he asked to do the job turned him in instead. The final plan involved faking a car accident, but the real story was the plan Gardner had apparently abandoned: to make it look like a bear did it. How might one do that? As Assistant DA Elizabeth Crawford explained, just the way you’d expect:

The original murder plot was for Gardner to hunt down a bear on the [acquaintance’s] property, then skin it to take off its four claws and its pelt.

The hired killer was to put the pelt on like a suit and wear the paws like boots and gloves, then maul the woman to death to make it look like an animal had killed her.

“[Gardner had] been watching her from the woods, so he knew exactly when she would take her garbage out, so it was supposed to look like she got mauled by a bear,” Crawford said.

“The claws were to be worn as boots and on his hands so there would be only bear tracks, no human tracks.”

Reports have differed as to who, exactly, was supposed to pose as the bear in this scheme. The AP report says it was Gardner, but the Plattsburgh Press-Republican (quoted above) said it was going to be the “hit man.” It didn’t happen either way, though, because of the one problem with this otherwise foolproof plan: the hit man “said he only had three acres to hunt on, and no bears.”

I don’t want to be too critical, but it does seem like you shouldn’t mention your bear-disguise murder plan to anybody until after you’ve figured out whether you can actually get yourself a bear.

With no bears handy, a new plan was needed, and that’s when Gardner came up with the car crash. He told the other man how to make it look like an accident, something in which Gardner claimed special expertise because he is “an experienced demolition derby driver.”

Given that he also owns a junkyard and has a history of abusive and violent behavior, it’s hard to understand why she kicked him out in the first place.

The acquaintance said he went to police as soon as he realized Gardner was serious, which (not surprisingly) was only after the second plan was discussed. He wore a wire and recorded Gardner talking about the murder plot.

Gardner eventually pleaded guilty to second-degree conspiracy, but asked for leniency because, he said, he had been drunk at the time and had intended to call everything off once he had sobered up -and, darn the luck, he had actually been arrested while on his way to the hit man’s house to cancel the job. “There is absolutely no proof” of that story, said the judge, who called the grand-jury testimony “chilling.” Which I’m sure it was, except for the part that was hilarious.

Area bears denied any interest in the intended victim’s garbage.

Live-Blogging From the Pants Trial

Blagojevich: Dying to Testify, Or Maybe Not [UPDATED: Not]