Not quite, but one parent suggested this may be the next step in a Toronto school’s stupid, stupid plan. Phase one was to limit the children to “sponge or other soft balls” because things like baseballs, soccer balls, footballs, and tennis balls are just too dangerous to be entrusted to children.

The ban, which Earl Beatty Public School put into effect last week, was not even prompted by an injury to a child, but rather came after a parent suffered a concussion from being hit in the head with a soccer ball. Perhaps due to the trauma of seeing the hapless parent get whacked, some kids expressed fear, claimed principal Alicia Fernandez, who did the only reasonable thing by ordering a complete ban on the thing that caused some kids to express fear.

Officials higher in the bureaucracy did the expected thing by fully “standing behind” their underling’s decision to nerf the playground and yet leaving the door open for a complete reversal of that decision if that appeared to be the prudent political move.

“I get the idea of wanting to ensure that kids are safe,” said Ontario’s Education Minister, assuring voters she “gets” an idea that must be one of the most basic in all human civilization. But, she continued, “I also know that principals know the lay of the land at their schools.” So if, let’s say, a particular school has a large concentration of Herculean offspring whose thunderous kicks or mighty throws could decapitate an adult human, well then, that principal should have the necessary discretion to act. “I feel confident that the right balance will be found,” she said, “and that we will see a community conversation happen with the principal, with the board and with parents at that school.”

She left out the kids, who have already decided. 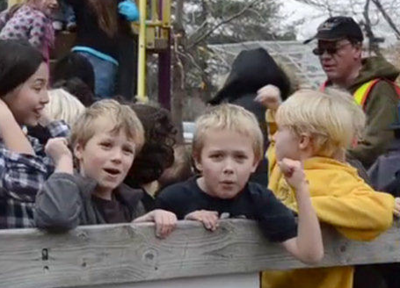 Honestly, could they really not foresee that middle-schoolers would seize any opportunity to chant about their balls? Is that not part of “the lay of the land” in middle school?

“You can take our balls,” one boy reportedly shouted, “but you cannot take our freedom!” This outstanding quote in particular at least partly restores my faith in humanity, as does the fact that their parents also appear to be part of the human race.

“I wasn’t surprised,” one said, but “[m]y husband freaked right out. He thought, this is absolutely insane.” Another parent said he was “disgusted” by the ban. “A lot of things could happen,” said Chris Stateski. “A child could trip on the asphalt, a child could fall off the monkey bars and break their arm. So many things could happen. What are they going to do – cover the schoolyard in pillows and take all the doors off the hinges? It’s just too much.” Taking the doors off the hinges seems dangerous, though – better to just nail them shut.

In an (unscientific) poll on the CBC’s site, opinion was divided on whether the nerfing of Earl Beatty was an appropriate response. Specifically, it was divided into 96 percent no and about 3.5 percent yes, with 0.37 percent stating they were not sure. This is a phenomenon that always fascinates me: somebody took the time to vote in a nonbinding, unscientific Internet poll, and yet could not muster sufficent interest to take a position. Really? You can’t decide where you stand on this? You need your balls back.

Man Gets Workers’ Comp for Injury Sustained When Punching Customer

Lawmaker Will Keep Promise to Run Naked Through Town