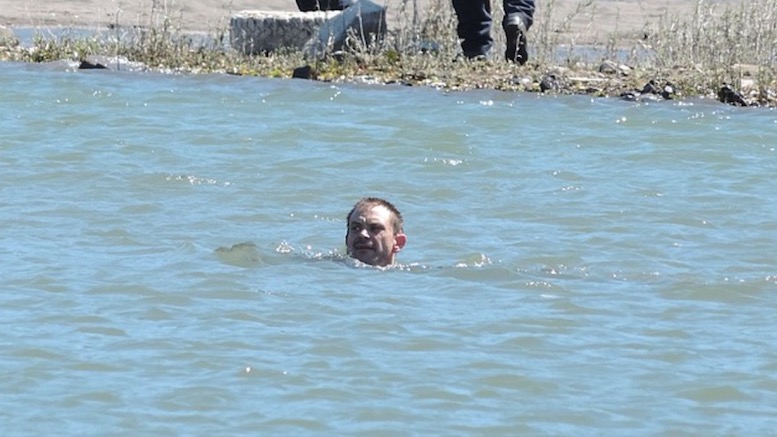 As we’ve discussed several times now, only on the rarest of occasions would it even be worth the effort to try to escape from the authorities in some way that involves a body of water. Just to recap, once you are in the water, you are necessarily going to be much slower than they are, and unless you are equipped to survive in the water for long periods of time (tip: you aren’t), it’s easy for them to wait you out.

And this is setting aside the potential risks, such as primarily death, that stem from you trying to flee through a large quantity of liquid that you cannot breathe, eat, or drink, and which is known to be full of beasts that would gladly eat you. See, e.g., “Bad Places to Hide: Atlantic Ocean” (Sept. 5, 2017) (shark); “Bad Places to Hide: Island in Alligator-Infested Lake” (Mar. 30, 2016) (alligators); see also “New Assault Charges for Rogue Canadian Golfer Who Tried to Escape on Ice Floe” (Feb. 26, 2018) (whatever lives in the Petitcodiac River, also risk of freezing).

But does anyone listen to me? Well, yes, they do sometimes, which is good because that’s part of what I get paid to do, actually. But do people thinking of trying to escape through bodies of water listen to me? Nope.

This guy (see above) certainly didn’t. According to the Hood River News—which I will admit I first thought was the “Hoo Driver News,” based on its URL—he leapt into the Hood River in Oregon at the end of an unsuccessful attempt to flee from police in a vehicle. And as is virtually always the case, the attempt did not get any more successful once he left the vehicle and entered the water. “Authorities went to the south side of the Hood in case he swam directly across,” the article reports, “and stationed themselves on both sides of the swiftly moving river.” Yep, that’s how it works. You: immersed in water, mobility low. Them: not immersed in water, mobility therefore higher than yours. Outlook: poor.

Especially poor here, because in addition to the huge and carnivorous salmon that I assume swarm just below its surface, yearning to feed on human flesh (I’m not real fond of deep water, as you may have noticed), the Hood is extremely cold this time of year. So is the Columbia, the much larger river into which the Hood feeds and into which the suspect was rapidly swept.

Now, I am going to give the Hoo Driver News points for saying that the “suspect led law enforcement on a tense and watery half-hour chase,” although I’m not sure “chase” is the right word and I’m pretty sure “led” isn’t. He might have been ahead of them, but that verb’s too active for somebody who was just being neutrally buoyant:

In a 30-minute drama witnessed by several law enforcement officers and members of the public, [the suspect] floated with the current, past the confluence with the Columbia and out into the main river channel.

“He was really cold, the river temperature is probably below 60, and he didn’t have much time [left],” said Sheriff Matt English.

Officers feared for the man’s safety, considering the strength of the current and how long he was exposed to frigid glacial water in the Hood.

“You don’t want to get out in that channel!” Deputy Noel Princehouse called at one point while the man was still within earshot…. “Come on in, please don’t do this!” and “That water’s cold, just let us bring you in!” were other calls by officers. 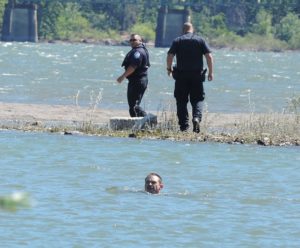 He does not seem to have been struggling or trying to reach officers, because like I said, people thinking of trying to escape through bodies of water never listen to me. I’ll just float quietly along here, he probably thought instead, on down the mighty Columbia and out into the Pacific, later to quietly paddle ashore at an isolated beach and live out my days as a free man, assuming the police don’t, like, have a boat or something, in which case I am screwed.

They had a boat. (They almost always do.) Pro: they saved his life. Con: no escape, and in fact four additional escape-related charges on top of the probation violation that triggered the whole thing in the first place.

For whatever reason, Oregon law refers to this as “eluding,” not “escaping.” I think those probably mean the same thing, but I assume Oregon’s use of the former is why the reporter insists on referring to this as a “watery elude,” or more specifically a “river elude.” That just seems very wrong, even if he’d clarified that it was just an attempted watery elude. On the other hand, maybe it’s unnecessary to say it was only an attempt, for the reasons explained above.