Today Boing Boing asks the question, "Is it legal for police to shoot photographers in a public place simply because they do not want to be photographed?" Well, no. No it is not. That includes Oakland.

This video, taken by the shootee, makes it pretty clear that everybody is just calmly standing around until (at about :33 in the video), one of the officers suddenly raises his weapon and shoots the guy with a rubber bullet (or possibly a bean-bag round), for no apparent reason.

It's probably impossible to identify the shooter because of the riot gear — let alone their habit of covering their name tags with black tape — but this freeze-frame shows the trail of the actual shot: 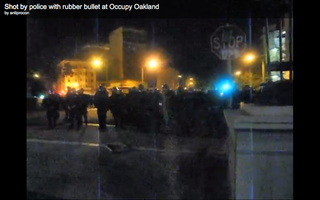 The number of recent arrests and even prosecutions (as chronicled at this site) of people who have done nothing more than take a picture or video of police officers in public, or just anything in public, is really pretty shocking. (This case in April actually involved a "wiretapping" charge against somebody who used his phone during a traffic stop — the officer's voice was recorded in the background, you see.) The only apparent reason for doing this would be to deter filming that might later be used to identify an officer who did something wrong, although I'm listening if anybody has another opinion. (Note: not listening to any "national security" excuses, though.)

This is illegal. In August, the First Circuit Court of Appeals held that it was unconstitutional to arrest and charge a citizen for taking cell phone video of three officers arresting another guy, apparently punching him in the process. The photographer was charged with wiretapping (seriously), disturbing the peace (really) and "aiding in the escape of a prisoner" (honestly?). The State dismissed that last one on its own, but pressed the other two charges. After they were dismissed, the photographer sued, and the officers raised a qualified immunity defense, arguing that "it is not well-settled that [plaintiff] had a constitutional right to record the officers."

Yes it is, said the First Circuit, which had no trouble concluding that there is an established, "fundamental and virtually self-evident" First Amendment right to gather information in this way, and a Fourth Amendment right not to be arrested for doing it in a peaceful and public setting.

I'm pretty sure there are cases holding that shooting somebody qualifies as a "seizure," but even if a rubber bullet doesn't count for that purpose (he can still limp away?), there's still the First Amendment and, here, also the Eighth. It's cruel, even if it is not as unusual as I would have thought.

Man With 86 Wives Will Have 86 Lawyers