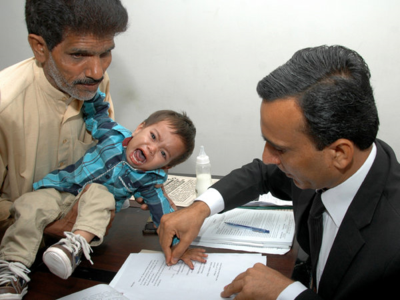 He's apparently being fingerprinted by Steve Carell, and frankly this would have made a lot more sense if it had been on an episode of The Office. But it actually happened. What goes through your mind when you're fingerprinting a baby, I wonder?

In this case possibly something like, "Am I really doing this right in front of a reporter?"

The New York Times, source of the picture above, also notes that the alleged baby's next court appearance will be on Saturday. He is out on bail in the meantime, although personally I'd have found he was not much of a flight risk.