Ron Paul may have stopped "actively campaigning," but that doesn't mean his adventures are over. Far from it. Although so far he only has 98 delegates, he may be able to rack up a lot more between now and the convention by going out and seizing them, with your help, in the upcoming game "Ron Paul: The Road to REVOLution." 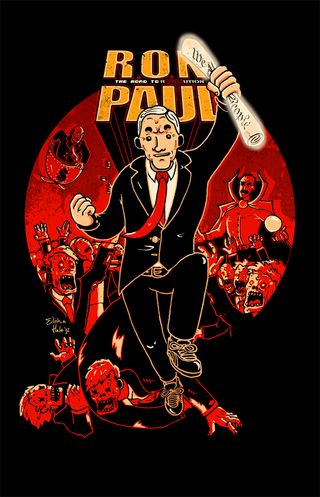 According to the project's Kickstarter page (all capitalization original):

The Road to REVOLution is a sidescrolling platformer action/adventure game, reminiscent of console classics like Super Mario Brothers and Sonic the Hedgehog.

You play the role of Ron Paul and make your way across all 50 states collecting Gold (sound money) and Delegates.

The game is full of original artwork and gameplay mechanics. Indie Game Development at its finest, the game is designed, programmed, conceived, and produced by me, D.S. Williams.

This is potentially awesome. Having the boss fights be against branches of the Federal Reserve is pure genius, as far as I'm concerned. From the description I'm a little concerned that there won't be enough violence, but the graphic above gives me some hope. I'm also looking forward to finding out who the "bonus unlockable characters" will be — I'm guessing members of the Austrian School of economics. You heard it here first.

The project more than met its funding goal of $5,000 ($11,073 was pledged). The game is expected to be finished in July, just in time to help Paul come up with the 1,100 or so delegates he still needs in order to get the nomination.