This year's Ambulance Chase 5k is already over, but put it on your calendars for next Memorial Day weekend if you are in the northern Virginia area. Proceeds from the race, during which runners actually do chase an ambulance, go to support the Fair Oaks Volunteer Fire & Rescue Company. 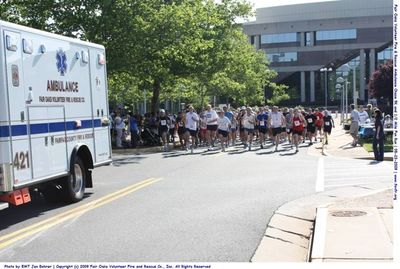 According to the Washington Post, the Fair Oaks Ambulance Chase 5K and Kids' Fun Run was started in 2009 by the company's president, a local attorney named Hana Brilliant, which really is a pretty good name for an attorney to have. "I got tired of all the ambulance-chasing jokes around the firehouse," she told the Post, "so I decided to use it to the Fire Department's benefit."

This year's Ambulance Chase, which unfortunately nobody seems to have run in a suit and tie, raised upwards of $7,000.

Woman Learns to Swear in Order to Make Partner