"The pictures tell the story," says CNN, and unlike some things heard on CNN, this one is at least partly true: 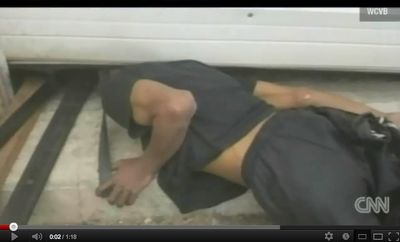 Assuming that by "pictures" CNN meant all those forming the video linked above, these do tell the story of a guy found with his head stuck under a heavy door at a Rent-A-Center in Brockton, Massachusetts. They also include portions of a cellphone video taken by the manager during a chat with the man while waiting for police to arrive. That video (a longer version of which can be found here) is great not just because of the pictures but also because of the burglar's super-cheery tone.

That's probably explained by the fact that the man initially told the manager he had been trying to fix the door when he got stuck, and so he apparently wanted to make it sound like everything was totally awesome now that somebody was there to set him free. "Oh yeah, I'm fine!" he said, for example, despite the fact that he had been trapped there for nine hours. And no, his admission that he had been there since about midnight did not help his story that he was just there to fix the door. Maybe door mechanics do tend to work in the middle of the night, and without bringing any tools, but if so the manager wasn't aware of it.

"Just hang tight," he told the man, who did so.

In another clear journalistic failure, CNN failed to make any comment on the hairstyle sported by the officer who appears at about :11 in the video above. Although maybe they are saving that for a full investigative special.