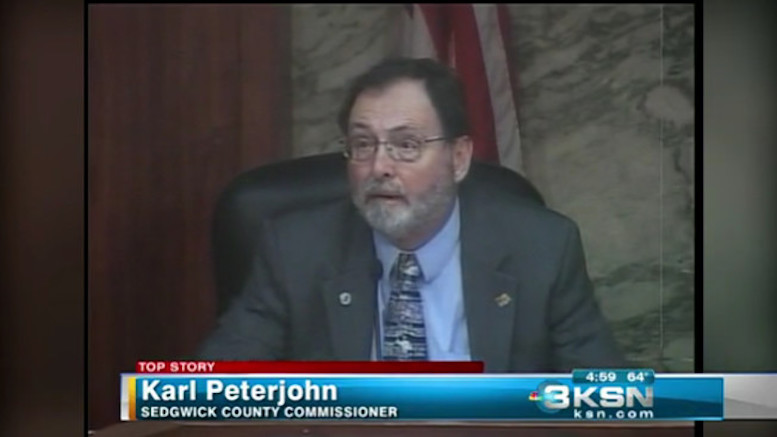 Probably not a criminal, but other "Karls" have been

If the video of this incident were a movie, here’s how the trailer might go:

Shortly after the Paris terror attacks—but still relevant for what will be obvious reasons—a county commissioner in Sedgwick County, Kansas, put together a slide presentation about people named “Mohammed” and showed it at the end of a commission meeting.

Let me ask you to pretend for a second that you don’t already know what his point was.

By itself that wouldn’t be mock-worthy. Local governments often take up issues not really within their jurisdiction. If they do something like, let’s say, call for a ban on space weaponry, that’s worth mentioning, but here Peterjohn was mostly expressing solidarity with, and condolences to, the people of France and Russia (this was also after the Russian plane was lost in Egypt). And that is of course fine and a nice gesture. But by the time Peterjohn got to the phrase “Islamic savages,” it seemed like there might be something much darker and dumber going on here.

He confirmed both adjectives at the end of the meeting, when he went back on the record saying he was going to provide a “public warning for citizens” and warning it would be “politically incorrect.” Would this warning concern, perhaps, the Quarterly Intrust Bank Arena Report or the parameters of National Public Health Thank You Day, both of which were also on the agenda? No. Rather, Peterjohn said he needed to warn the public that there is now a “clear and present danger” in our midst, and that danger is Gregory Harlan’s retirement clock.

No, wait, it’s “Islam.” I misread my notes. Man, my handwriting has really deteriorated.

Peterjohn offered a rambling, 13-minute statement that fell somewhere between Trumpish bullshittery and Carsonian utter fabulism. And he did not get more than 60 seconds into this diatribe before logic walked out on him (along with one of the commissioners). “I’ve heard some folks say that, well, we’ve got an enemy at the gates,” Peterjohn said he had heard some folks say. But “[i]n light of the most recent Muslim atrocities,” he continued, “we have—in my opinion there is a clear and present danger in our own country.” How had evidence of attacks against Russians in Egypt and French in France convinced him there were traitors in Kansas? Well, because … Muslim.

“Now I’ve heard some folks say, well, not all Muslims are terrorists,” Peterjohn went on. Did he disagree with the folks on this point? Well, in his opinion, that statement is “[t]rue, but irrelevant.” Because? Because “[n]ot all Russians were Communists, not all Germans were Nazis,” he semi-explained. Okay, hang on.

I doubt we’re listening to the same folks, but the ones I’ve heard say “not all Muslims are terrorists” are talking about the problem of inferring group characteristics from what you know about only a few group members. Let’s say you’ve seen exactly one swan in your life and it was black. You might infer from this fact that all swans are black, and—because in my example you were raised by wolves or something—that wouldn’t necessarily be unreasonable because it’s the only evidence you have. If you had seen five or ten swans, and they were all black, the inference would be a little stronger—but it would still be wrong. You know nothing about the larger population, wolf baby, and so any prediction you might make about it is not at all likely to be accurate. Your brain will still suggest the inference, but the challenge is to understand that this is a well-known “cognitive bias” and to override or compensate for it.

Okay, now with people. Let’s say you’ve only met one German in your life, and that German was a Nazi. First of all, yes, Grandpa, you’ve told the Hindenburg story before. The point is that to predict that the next German you meet will also be a Nazi, based on that limited evidence, would almost certainly be wrong. Even in the 1930s it would probably have been wrong. Anyway, this cognitive bias/logical fallacy turns out to have quite a few names, but when applied to people we usually call it “bigotry.”

So, the folks who Karl heard say “not all Muslims are terrorists” were presumably calling attention to this problem. Which he plainly does not understand, because he called the statement “true, but irrelevant” and proceeded to argue that we must treat all Muslims as terrorists because some are. Which, of course, is the opposite of the statement he had just said was true. Normally, the opposite of true is false, not “irrelevant.” But then this is bigotry, not logic.

Not content with taking the position, Peterjohn drove it home in a way that, implausibly, made it even dumber. Instead of talking about Islam itself (that would have required facts), he showed slides depicting about a dozen men named “Mohammad” who, it turns out, are all criminals:

Ultimately, the point is that as stupid as the name thing is, the argument Trump and others are making about Islam and Muslims in general is the same argument and is wrong for exactly the same reasons: that there are a few bad people in a group that large tells you exactly nothing reliable about any other member of the group. Mr. Karl Peter John should be judged based on what he says and does, not on how he’s labeled (triply suspicious though it is). Muslims are entitled to the same treatment.

Update: A reader reminds me (thanks, James) that legendary weird-newsman Chuck Shepherd noticed in the 1990s that there seemed to be an awful lot of alleged or convicted murderers whose middle name is or was “Wayne” (John Wayne Gacy, etc.), and over the span of at least ten years compiled a remarkably long list of such people for his News of the Weird column. [That’s sadly gone now, but here’s an alternative source.] Unlike Karl—whose list was much shorter—Chuck hastened to add that “I have no idea whether the number of middle-named Wayne murderers is statistically significant.” He speculated that if so, it might be due to fathers in the 1960s naming their sons after John Wayne, but made clear this was pure speculation; he certainly did not suggest that we needed to worry about Waynes in general based on this evidence.

I sent the link to Karl just now with the following note:

I saw the reports about the slideshow on dangerous people named “Mohammed” that you offered to support your concern about having Mohammeds around. I wondered if you were aware of the extensive list of accused and convicted murderers named “Wayne”—at least one of whom is or was from Kansas! Does this change your view at all regarding the slideshow? If not, will you also warn the public about Waynes?

Also, I noticed that the commission’s website doesn’t reveal your middle name. Would you be willing to disclose it?

I’ll let you know what he says.