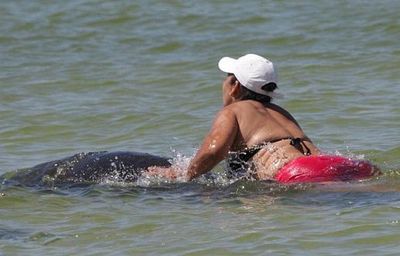 Unfortunately, this woman is not being eaten by the Loch Ness Monster, she is riding on a manatee. This is comical in the abstract, but terrible in reality, because manatees are an endangered species and have enough trouble without some tourist latching onto them like some enormous shrieking lamprey. Less importantly, it is also bad for the tourist in question, because under Florida law this is illegal. The law does not specifically criminalize manatee-riding, but it is (except at this refuge) unlawful:

So pretty much any interaction is covered. I'm not sure how you tell whether a manatee is annoyed, but based on that picture I'd say we have a clear case of manatee harassment, at a minimum.

The Pinellas County Sheriff thought so, too, after this and other photos of the manatee-harasser were sent to his office. He actually called a press conference asking for the public's help in identifying the woman, and that paid off yesterday when she voluntarily turned herself in. When deputies met with her, "she admitted touching the manatees but claimed she didn't know that doing so was illegal," probably the standard manatee-touching defense. Officials have reportedly not decided whether to charge the woman yet, but she could be fined up to $500 or given up to 60 days in jail.

The manatee, also known as the "sea cow," is a large and placid marine mammal that eats only plants, although it can eat a shitload of plants, according to Wikipedia, generally at least 10 percent of its body weight every day. It lives in coastal areas of the Caribbean, Amazon basin, and West Africa, and in all these places humans and their boats are by far the biggest threat. Although the situation seems to have been improving, it remains an endangered species and is protected by state law, federal law, and Jimmy Buffett (seriously). The manatee is a gentle and intelligent animal that deserves our respect and consideration.

The dugong, on the other hand, can go f*ck itself.