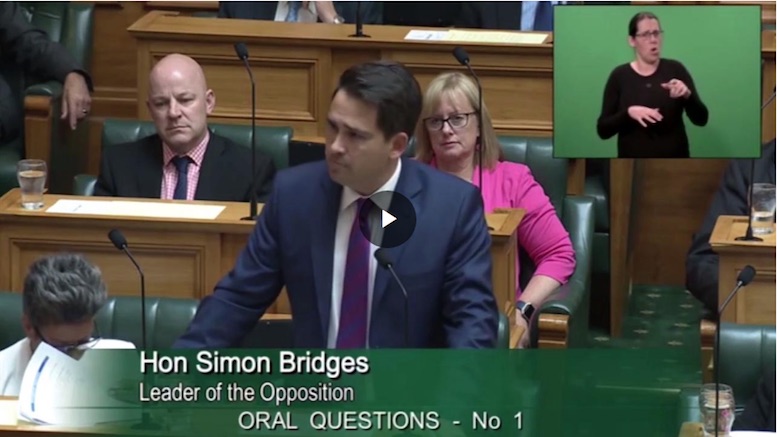 I would like to thank the Parliament of New Zealand for offering something that I could post here without too much effort, given the insanity of my schedule over the past few days and up until about 3:30 on Tuesday. It is greatly appreciated.

The New Zealand Herald reports that Simon Bridges, leader of the country’s opposition party, was kicked out of the chamber today (or at least May 7, New Zealand time, whenever that is here) for arguing with the Speaker during Question Time. This argument followed a claim by the Speaker, Trevor Mallard, that Bridges had uttered a “barnyard noise” during comments by Prime Minister Jacinda Ardern.

Bridges strenuously denied the allegation, stating, “I made no such noise and it is entirely unfair for you as a Speaker to say that sort of unprofessional comment.” The Speaker then exercised his prerogative to direct the member to leave the chamber (temporarily).

It’s worth 1:30 of your time (and mine, apparently) to watch the clip posted by the Herald. It begins with the Prime Minister speaking, and at the :03 mark, a noise can plainly be heard emanating from someone or something in the chamber and lasting for approximately two to three seconds. There seems to have been little doubt that it emanated from Bridges, and so his assertion that “I made no such noise” is presumably his way of disputing the classification of this as a “barnyard noise.” But, as the Herald put it, “it is clear Bridges makes a loud sound of sad disapproval in response to an answer given by” the prime minister, so the precise classification of it does not seem that relevant.

It does sound to this reporter like he was mooing, however.

Bridges first argued that the Speaker was showing favoritism to the other side, claiming that their points of order were frequently “ridiculous” but when he took issue with something they said, he suddenly became “the naughty boy of this Parliament.” The “barnyard noise” allegation followed, and thence the argument that resulted in Bridges’ expulsion.

Searching Parliament’s website for the word “barnyard” revealed that this is not the first time such an allegation and/or noise have been heard within that chamber. In May 2018, this happened:

SPEAKER: Yes, and—[Interruption] No, the member will resume his seat. What I’m saying is making noises which are not words in English but noises that might be more commonly heard in a barnyard are not appropriate.

Hon Gerry Brownlee: I raise a point of order, Mr Speaker. How is, effectively, accusing a member of this House of making a barnyard noise not a personal reflection?

SPEAKER: Well, I should probably have called it a loud guffaw of the type certainly not heard normally in this place.

Emphasis added. Whether the Speaker will in future similarly reclassify Bridges’ conduct as the mere utterance of a “loud guffaw” remains to be seen.

Hawaii’s Now Asking Birthers to Prove Who They Are