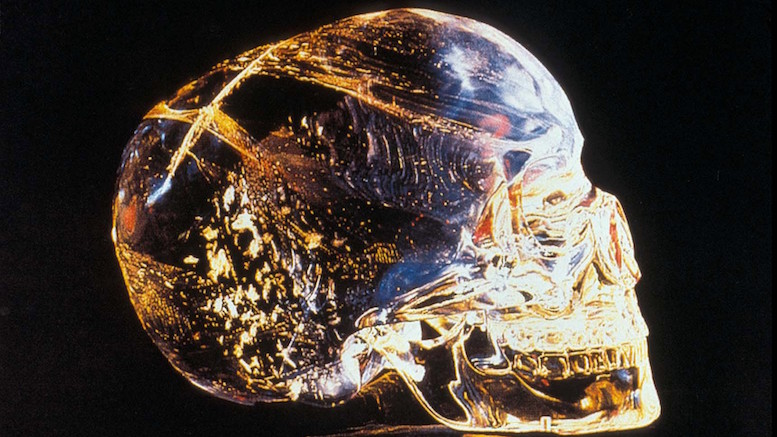 The Hollywood Reporter‘s excellent legal blog reports on a lawsuit filed by the Director of the Institute of Archaeology in Belize, demanding the return of “Belize’s most notable Crystal Skull.”

Not only is this crystal skull allegedly the most notable of that country’s crystal skulls, it is said to have great cultural significance. The plaintiff alleges it was stolen from a temple and illegally taken out of the country decades ago. Worst of all, he says, this very same skull was featured in the 2008 film, “Indiana Jones and the Kingdom of the Crystal Skull,” which grossed almost $800 million worldwide, of which Belize has received exactly zero dollars. The plaintiff is therefore suing not only the current possessor of the skull and the estate of those who stole it, but also LucasFilm, Walt Disney and Paramount, seeking not only the return of the skull but also an accounting of profits and so forth and so on.

The lawsuit may or may not be related to the fact that the Institute appears to be promoting trips to Belize (right) to celebrate the ending of the Mayan calendar cycle on December 21.

According to the complaint, while today “archaeologists, anthropologists and tourists alike are drawn to destinations such as Xunantunich in the name of discovery,” with great package deals probably available now, 100 years ago it “was coveted for slightly different reasons.” Specifically, people wanted to come steal Mayan artifacts. More specifically, F.A. Mitchell-Hedges and his daughter Anna wanted to steal them. In 1924, so the story goes, they found a crystal skull buried under an altar, “a fact [his daughter] would disclose in a documentary produced by NBC … and aired on the ‘SciFi’ cable network in 2008.” What she disclosed in this documentary—undoubtedly fully vetted by a team of experts at SciFi, the network that brought you “Mansquito“—was that they did indeed find and export the skull and that she had inherited it after her father’s death. She died in 2007, according to the complaint, and the “Mitchell-Hedges Skull” now resides with her husband in Chesterton, Indiana.

So what’s with the skull? Well, a crystal skull is a crystal that has been carved into the shape of a skull. Not impressed yet? “These artifacts are attributed to Maya origin.” Still not impressed? “Associated in today’s popular culture with having magical or other supernatural powers”—and that right there is where the bullshit starts to deepen—”each of the four known Crystal Skulls holds tremendous value not only for its rarity but also as a semi-precious stone. There are only three Crystal Skulls on public display worldwide,” the complaint alleges, housed at the British Museum, the Smithsonian, and the Musee du Quai Branly in Paris. One of the defendants has the fourth.

I also have one on my shelf, but let’s keep that between us for now.

Are these items indeed magic alien crania or Mayan psychic doodads with remarkable powers? Are they priceless Belizian cultural heirlooms? Read on for the surprising answer!

The claim of mysterious powers, which you may have noticed the complaint did not quite endorse, is one of those New Age/pop-culture things that might get a hungover, couch-bound you to watch a documentary on SciFi but has absolutely no evidence to support it. It’s a good story, and one that of course was incorporated into the last and indisputably worst “Indiana Jones” movie. The skull in that movie repelled ants or something like that, and while they never really explained why an alien’s skull would repel Earth insects or anything else (good thing they didn’t eat ants!), it looked okay on-screen. But in actual fact, even if you write it with initial caps a Crystal Skull is still just a crystal that looks like a skull.

But what about the artifacts on display at those well-known scientific institutions? Does the British Museum actually possess a Crystal Skull? Yep, although it looks nothing like the one in the movie. Actually, they have several, although most of them are teeny, but there is one they actually refer to as The Crystal Skull. Well, there you go!

Although of spectacular appearance and representing considerable craftsmanship, the origins of this large carving of a skull in rock-crystal are most uncertain. [Uh-oh.] Purchased from Tiffany of New York in the late 1890s, the skull had passed through many hands … [A]t the time of its entry into the collections of the British Museum it had generally come to be accepted as being from pre-Hispanic Mexico. Attempts to verify this on technological grounds have not proved successful. [T]he overall appearance does not present an obvious example of Aztec or any other Mesoamerican art style. When last examined by the British Museum Research Laboratory the conclusion was that some of the incised lines forming the teeth seemed more likely to have been cut with a jeweller’s wheel than to have been produced by the techniques available to Aztec lapidaries.

Translation: as to at least one of the Crystal Skulls mentioned in the complaint, the best anyone can say is that they got it at Tiffany’s. Oh, wait—

Other speculations as to the origins and possible use of the crystal skull are legion. The question remains open.

Corrected translation: The British Museum could not rule out extraterrestrial origin!

(By the way, the Mitchell-Hedges Skull is in Indiana, and the comments above are identified as “Curator’s comments (Jones 1990).” Coincidence?)

So there is apparently no evidence whatsoever that the British Museum’s skull came from anywhere in this hemisphere, let alone from Belize. They do have one, though, that’s true. So does the Smithsonian. But they don’t have it on display. According to Smithsonian Magazine, somebody made an “unsolicited donation” of a crystal skull in 1992, which they unsportingly also chose to analyze. In fact, they took it to the British Museum and asked an expert there to use a scanning electron microscope on it. “In each case,” the article says, “she noted that modern tools and abrasives had been employed,” I assume meaning modern Earth tools and abrasives. “Experts now believe,” it continues, “that many extant crystal skulls were made in Germany during the late 1800s,” although some may have been made in the Americas in order to fool tourists. One skull the Smithsonian tested turned out to be made of glass, not crystal. “So that turned out to be a fake fake,” the spoilsport researcher said. Not one of these things has ever been authenticated. (I haven’t had mine tested, but then I got it at Disneyland.)

Depending on who you’re willing to believe—the Smithsonian or a Director of Archaeology who is also promoting trips to Belize—an investigation revealed that neither Mitchell-Hedges found the skull there in the first place. The elder one bought it at Sotheby’s in 1943, and then began displaying it to guests at dinner parties, calling it “The Skull of Doom.” That’s a nice touch, but the only thing doomed now is this lawsuit.

As a lawsuit, that is. In terms of publicity, I suppose it’s served its purpose. (The plaintiff’s attorney did not respond to my email asking for comment on questions such as, did you file this solely for publicity purposes, and is that ethical?) You should definitely visit Belize, but not because of this nonsense.