As you know if you have been following this dramatic story unfolding in Brooklyn Park, Maryland, seven-year-old Josh Welch has been suspended for two days after he allegedly fashioned his breakfast pastry into the shape of a gun. 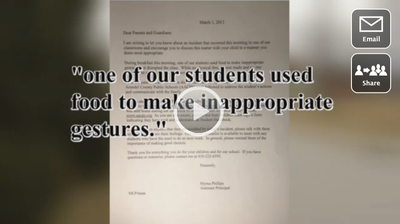 The elementary school that was the scene of Josh's brutally harmless rampage sent students home Friday with a letter describing the incident as if it had actually been serious:

I am writing to let you know about an incident that occurred this morning in one of our classrooms and encourage you to discuss this matter with your child in a manner you deem most appropriate.

During breakfast this morning, one of our students used food to make inappropriate gestures that disrupted the class. While no physical threats were made and no one [was] harmed, the student had to be removed from the classroom.

As you are aware, the … Code of Student Conduct and appropriate consequences related to violations of the code are clearly spelled out in the Student Handbook, which was sent home during the first week of school and can be found on our website, www.aacps.org….

If your children express that they are troubled by today's incident, please talk with them and help them share their feelings. Our school counselor is available to meet with any students who have the need to do so next week. In general, please remind them of the importance of making good choices.

Pretty sure that if your children are "troubled" by another kid biting a pastry into something that looks sort of like a gun and waving said pastry around, you have already failed as a parent.

The two-day suspension indicates that the school considered this a "Level 3" violation, but exactly what part of the Code was in play is not clear. The letter suggests Josh disrupted the class, but the reference to "inappropriate gestures" involving food can only mean he was also charged with a pastry-based-weapons violation. The Code defines "other weapons" as:

Any gun of any kind, loaded or unloaded, operable or inoperable, including any object other than a firearm which is a look-a-like of a gun. This shall include, but is not limited to, pellet gun, paintball gun, stun gun, taser, BB gun,flaregun,nailgun,andairsoftgun.

Josh's father expressed amazement at the school's reaction to the incident, which involved a pastry.

LucasFilm Employee Alleges She Was Called An “Ewok”