The San Diego Union-Tribune is reporting that Mayor Bob Filner may resign on Friday as part of a proposed settlement of a sexual-harassment lawsuit against him and the city. As you may recall, more and more women have come forward to complain about Filner since a former aide sued him for harassment a few weeks ago. See "Mayor Complains That City Didn't Train Him Not to Harass Women," Lowering the Bar (Aug. 8, 2013). I believe at this point officials have just asked women to speak up if they have not been harassed by Filner, so the resulting list will be more manageable.

The details of the proposal will not be confirmed until after the city council considers it on Friday, so talk about Filner's resignation is just a rumor for now. And the city attorney firmly put everyone on notice yesterday that "[a]ny rumors you hear about the proposal you may deem to be untrue" because everyone involved has sworn to keep the negotiations entirely confidential, sacred oaths that are never broken.

On the other hand, "potential mayoral candidates were told by insiders Wednesday night to expect a special election campaign to begin Saturday," so I think you may deem it however you like. 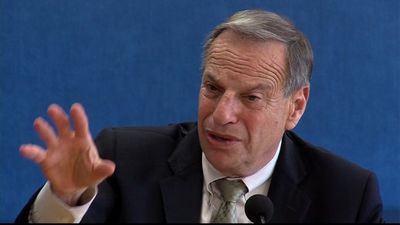 Filner's situation is probably not being improved by the press conference being held right about now by attorney Gloria Allred, who was scheduled to "give her reaction to the tentative agreement" Thursday at 1 p.m., joined for that purpose by Filner's former fiancee. Wow, it's bad enough to have Gloria Allred talking about you, but if she's going to be joined by your former fiancee for a public statement, that's probably not something you want to TiVo.

It's not clear at the moment what the former fiancee will say in the press conference, but according to a statement she made about a month ago, the last straw for her was when Filner "began texting other women sexually explicit messages and setting up dates while in my presence and within my line of vision." I'm certainly no relationship expert, but that does seem like a bad sign.

“Citizens” Know More About Simpsons Than About First Amendment