Gen. Keith Alexander now runs the NSA but he used to be in charge of the Army's Intelligence and Security Command. Here's what he spent your money on while he was there: 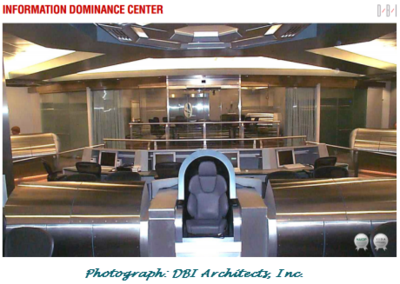 What is that, exactly? This:

When he was running the Army's Intelligence and Security Command, Alexander brought many of his future allies down to Fort Belvoir for a tour of his base of operations, a facility known as the Information Dominance Center. It had been designed by a Hollywood set designer to mimic the bridge of the starship Enterprise from Star Trek, complete with chrome panels, computer stations, a huge TV monitor on the forward wall, and doors that made a 'whoosh' sound when they slid open and closed. Lawmakers and other important officials took turns sitting in a leather "captain's chair" in the center of the room and watched as Alexander, a lover of science-fiction movies, showed off his data tools on the big screen.

"'Everybody wanted to sit in the chair at least once to pretend he was Jean-Luc Picard," says a retired officer in charge of VIP visits.

Originally I had added emphasis to certain parts of that quote, but then I decided the whole thing is so ridiculous there would be no point. I mean, what do you emphasize? The name "Information Dominance Center"? The design as a whole? The "doors that made a 'whoosh' sound"? How much do you think the "whoosh" sound cost you? "Captain's chair"? Jesus Christ.

I guess those are the things I would emphasize.

The quote is from a new article in Foreign Policy magazine titled "The Cowboy of the NSA," which discusses what the article calls Alexander's "all-out, barely legal drive to build the ultimate spy machine." I'm not sure why the article describes it as "legal" (regardless of adverb), but maybe the author hasn't been reading the paper. Obviously, not only does Alexander not care all that much about legal restrictions, he also feels free to spend tax money on stuff like a leather "captain's chair" that he and his friends can sit in while they show off their tools to each other. The chair is in the middle of a 10,740 square-foot room that, according to the architects, "gives the illusion that one has boarded a starship." (There are, or were, better pictures of the room in the brochure from which the above picture was taken, but oddly enough the architects' website is down due to "increased traffic.") Wonder what the illusion is at the $2 billion complex in Utah. Space Mountain?

I'm sure Alexander enjoys thinking of himself as Jean-Luc Picard, but this chair would be more appropriate. 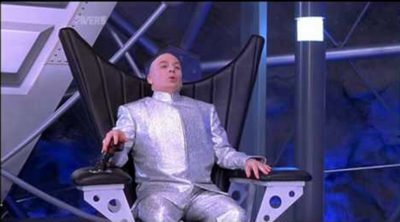