In a lovely ceremony last week, the president of Argentina, Christina Fernández de Kirchner, became the godmother of Yair Tawil (second from left). 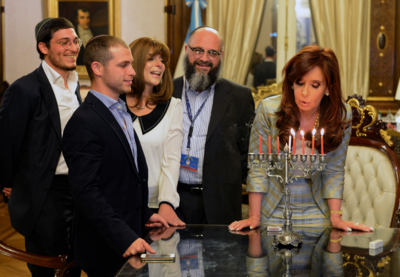 Contrary to some reports, this had nothing to do with him turning into a werewolf. Not directly, anyway.

According to NBC News, for example, Yair Tawil is the seventh son of his family, which according to legend means that he is cursed to become a werewolf on every full moon after his 13th birthday unless he is adopted by another family. (Seventh daughters become witches.) Argentine presidents have been "adopting" seventh sons or daughters since 1907, and while the body of NBC's report doesn't actually say this is motivated by the werewolf legend, the headline ("Argentina's President Adopts Boy to End Werewolf Curse") really kind of does. Many other news outlets have offered similar reports.

But according to The Guardian, these are two separate and unrelated traditions.

Quoting an actual Argentine historian, even, The Guardian's report says that there is indeed an old legend in which a seventh son, or even worse, the seventh son of a seventh son, is likely to fall victim to the curse of the lobizón. The lobizón is sort of a werewolf, or a werething, anyway:

In the Argentinian version, the lobizón transforms into a mixture of pig and dog every Tuesday and Friday night—not just once every full moon. Unlike other werewolves of myth, the lobizón transmits its curse not through its bite but by passing between the legs of its unfortunate victims.

This was supposedly adapted by Argentina's gauchos from the older European werewolf legends, because apparently they liked those legends but thought they weren't goofy enough.

But the presidential-adoption tradition dates back only to 1907, and according to the historian, it is "not in any way connected" to the werewolf legend. Rather, it apparently derives from a Russian tradition in which the Tsar became godfather to seventh sons, a custom that Russian immigrants asked Argentina's president to adopt in 1907. A law was later passed (either "Law 20,843" or this presidential decree, or maybe both) providing that under certain circumstances every person "who has been sponsored by the Chief Executive" in this way will receive a gold medal and a scholarship.

The law doesn't seem to mention the werewolf thing, but that would certainly be another potential benefit.

It is not impossible—though presumably the historian looked into this—that the Russian tradition itself arose from a similar legend, which would mean that the Argentine adoption law ultimately is werewolf-based, if remotely. There are plenty of folk traditions around the world involving seventh sons, or seventh sons of seventh sons, although the special powers such people are said to have are not necessarily evil. (I'm going to link to a Wikipedia article for this one, really just because it starts out "This article is about the folklore concept. For the Iron Maiden album, see Seventh Son of a Seventh Son.") But to find out whether the Tsar did adopt seventh sons, let alone did so because they might go werewolf otherwise, is going to take further research. Same for the allegation in some of these reports that the Argentine law was enacted partly to stop an existing practice of abandoning seventh sons because of this superstition.

One way or another, had I known about this one before now, it would be in the book. Someone in Brazil was kind enough to send me a ridiculous law from that country, but maybe my influence hasn't spread any further south yet. (I blame you, Paraguay.)

No Trademark for Chippendales’ “Cuffs & Collar,” Board Rules