"Dubuque is overflowing with things to see and do," says TravelDubuque.com, in a statement that's apparently also supposed to apply in January, when the average temperature there is about 26 degrees (-3 in Canadian degrees). Officials are trying to cope with this overflow problem by making some of those fun things illegal, in particular sledding.

Wikipedia defines "sledding" as the activity of "traveling down a snowy hill using a sled," an activity that is "usually done during the winter when there is snow." (The editors acknowledge that "[t]his article has multiple issues," and this might be one of them.) It is conducted "most often in a prone or seated position" (that might be another one), using a vehicle variously referred to as a "sled," "sledge," or "toboggan." Of course, you can sled on any goddamn thing you want to sled on, except maybe a double-decker bus. 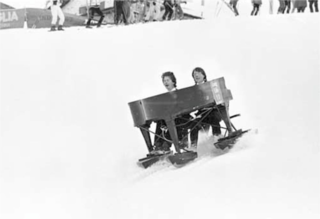 Not in Dubuque, though, at least not in 47 of the city's 49 public parks. Since January 7, sledding, downhill skiing, snowboarding, and tobogganing have been illegal on city-owned property outside the designated areas. Riding an inner tube on public property is prohibited without exception.

To be fair, Dubuque officials have stressed that they are not anti-sledding, they are anti-being-sued-for-sledding-injuries. In an announcement (and memo) they say they've asked state legislators to grant cities immunity from sledding-related lawsuits, similar to the immunity that currently exists with regard to other activities. But to date legislators have not done so. Also, the announcement says, the city just does not have the resources to inspect and evaluate all possible sledding areas (i.e. hills) on its property. As a result, therefore, it has banned sledding in all but two parks.

Officials say that first offenders will get a warning, but after that a failure to stop sledding, or repeated unsanctioned sleddings, could result in a fine of up to $750.

This is apparently a growing trend among American towns where sledding is possible, as this Chicago Tribune editorial notes. They are of course concerned about liability, and the editorial gives examples of a few multi-million-dollar settlements of sledding lawsuits. There is no question that sledding is dangerous: about 23,000 children a year (and probably lots of adults) are injured by it. There is also no question that the danger is what makes it fun. (Makeshift jumps or ramps are prohibited even in the two sled-friendly parks, because, well, obviously.)

It seems likely that Dubuque officials have done this not just to avoid liability but also to put a little pressure on legislators in whatever the capital of Iowa is. But here's the deal—a state doesn't (or shouldn't) need a statute that lists every fun but dangerous thing that cities can't be sued for. If it does, then Iowa's current law is clearly inadequate, because it only protects cities from lawsuits resulting from "skateboarding, in-line skating, bicycling, unicycling, scootering, river rafting, canoeing, or kayaking." (Congratulations to the unicyclists' lobby, by the way.)

This is yet another case where the "assumption of risk" doctrine can or should come to the rescue, as I have written about many times. Does golf need to be listed? What about bonfires? What about the risk that a guy dressed as a lion will throw a hot dog into your eye? There is no shortage of creatively dangerous ways to have fun, and most of those I would encourage even if they are stupid. Maybe especially if they are stupid.

Some reports say that citizens are planning to protest the ordinance by sledding in unapproved areas. I'm all for that, but I would just ask that at least one person try to sled while riding a unicycle, or maybe put some runners on a kayak. You know, for a test case.