"That's my question about these guys," said the talking head about the Charlie Hebdo attackers, in a discussion about police militarization and racial profiling. "[I]f they had ski masks on, do we even know what color they were, what the tone of their skin was? I mean, what if they didn't look like typical bad guys? [brief pause] As we define them when we think about terror groups."

I'm trying to be fair here and think of a possible meaning other than "typical bad guys have a particular skin color." Maybe someone else can—this comes out of her mouth at about 3:00 in the video clip (see link above). 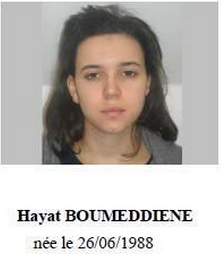 Anyway, turns out they don't. Although the talker probably couldn't have known it when she said that on Wednesday, ironically enough one of the alleged terrorists looks like this—>

Yup. A 26-year-old white woman. Or, she's sort of a pinkish-tan, at least, I don't know how dark you have to be for some people to consider you a "typical bad guy."

Another member of this same group (TV group, not terror group) kept saying "But we're being hunted. We are being hunted." So maybe they were all subversive French cartoonists, I don't know. The clip started in the middle.

There was one person I consider intelligent in this group of five (not that I agree with everything Kennedy says), but one of the other four was also going on about how this incident shows how we need to not only use racial profiling but also make sure our police are as heavily armed as possible. (He actually said they should be "over-militarized" before catching himself.) But this second opinion too was a little short on (a) facts and (b) sense-making.

There were police posted at the Charlie Hebdo office itself because of prior threats. They didn't have assault rifles, but if somebody gets the jump on you would it matter? And if those guys had been more heavily armed, the terrorists would have just brought more people. Because they can pick the place and time of an attack, there's no way to ensure any police there won't be outgunned. And there is no shortage of heavily armed police in Paris, such as these guys with assault rifles, body armor, and also their own ski masks (so much for my idea of profiling based on wearing ski masks). So having a SWAT team, or lots of them, also does not necessarily deter an attack.

I'm not saying we shouldn't have SWAT teams, let alone guns, of which I am a fan, just that it makes no sense to militarize our whole society and crap on the Bill of Rights, with all the other consequences that has, in an effort to be 100% safe. Sadly, that's just not gonna happen.

I mean, in a world where we're not even safe from flying turtles, we just have to soldier on.

Note: Apparently and unsurprisingly my first headline was incorrect. I assumed "the stupid" would be a male-gendered noun. I'm told it is not (to the extent this even makes sense in French).  My apologies.