How many times does it have to be said? Lasers don’t kill people, sharks with frickin’ laser beams attached to their heads kill people. That doesn’t make the laser evil. 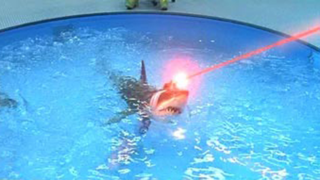 Wait, did someone argue that a laser is inherently evil? Yep. Might it have been the United States government? Yep.

Of course, the government has lots of lasers itself, and is desperately trying to make some that can actually be used to kill people and melt things. (You may be remembering those laser-equipped 747s that were supposed to shoot down missiles. Didn’t work, we learned $5.3 billion later. But they’ll get it right this time.) So it may seem odd that it would argue in court that lasers are “insidious instruments normally used for criminal purposes,” and that possessing them is “indicative of a readiness to do evil.” Why would it say that?

Because an immigrant had one.

John Coquico is a citizen of the Philippines but has been a permanent resident of the U.S. for some time. In 2007, he was convicted of second-degree robbery in California, and the Department of Homeland Security decided it wanted to deport him. The U.S. Code has lots of reasons that aliens can be deported, including conviction of some crimes. But not any crime will do. Aggravated felonies? Yes. Espionage. Of course. Gun crimes? Sure. Stealing a magazine and a bus pass? Well, that’s not on the list. But it is second-degree (unarmed) robbery, and some courts have held that robbery is a “crime of moral turpitude,” and those are on the list.

I am alone the villain of the earth,
And feel I am so most. O Antony,
Thou mine of bounty, how wouldst thou have paid
My better service, when my turpitude
Thou dost so crown with gold!

Antony & Cleopatra, Act IV, scene VI (1623) (emphasis added). “Moral turpitude” is a legal term; as the Ninth Circuit defines it, for example, it means an act that “(1) is vile, base, or depraved and (2) violates accepted moral standards.” So, yeah, it’s basically “turpitude” with “moral” tacked on to make it sound more impressive. That’ll be $500, please.

Anyway, Coquico didn’t argue that robbery isn’t a “crime of moral turpitude” (although given that he stole a magazine and a bus pass in an unarmed robbery, I’d have run that one up the flagpole). That would have been enough to deport him, except that a single crime of moral turpitude isn’t enough if the person has been in the U.S. for more than five years. That must be the case with Coquico, because DHS had to try a different provision, one that allows deportation of any alien who has been convicted of two or more “crimes involving moral turpitude.”

Turns out Coquico had been convicted of another crime in 2006: he had aimed a laser pointer at a police officer while both were at the Alameda County courthouse (for an undisclosed reason). This, DHS argued, was the second “crime involving moral turpitude.” Sounds good to me, said an immigration judge.

It may be news to you that it’s actually a crime to aim a laser pointer at someone, but it is in some states. Well, just aiming it isn’t enough—you have to do it “in a threatening manner with the specific intent to cause a reasonable person fear of bodily harm.” The concern—I hope—is not that people might think you were shooting them with a laser gun, but rather that they might think you’re about to shoot them with a real gun to which the laser is attached. It’s only a misdemeanor, but if the person you lased is a cop, you could get six months to a year for this in California.

But the issue here wasn’t whether it’s a crime. It was whether it’s a crime of moral turpitude. Your government, of course, argued that it is. And also of course, the DHS administrative-law judge agreed with DHS. Specifically, she agreed that doing this was morally turpitudinous because lasers “are insidious instruments normally used for criminal purposes,” and that merely possessing them was “indicative of a readiness to do evil.”

I assume she’ll be horrified to find out there’s one in her DVD player.

It’s not clear whether the Board of Immigration Appeals signed on to the “evil laser” rationale. It seems to have affirmed instead on the grounds that this dastardly crime involved a police officer and “a device which gives the appearance or facade of the use of a deadly weapon.” But in an opinion by one of the court’s more conservative judges, the Ninth Circuit reversed.

First of all, it pointed out, you guys aren’t even reading the laser-pointer law correctly. It doesn’t say a laser pointer is or resembles a “deadly weapon.” It covers both “laser scopes” and “laser pointers,” and whatever you might say about the former, the latter—which you can buy at any office-supply store, for God’s sake—does not resemble a “deadly weapon.” More to the point, this law makes it a crime to try to scare somebody with a laser whether or not they are actually scared or even notice that you did it. It is not, therefore, vile, base, or any of that other stuff to do this, the court held. If bad, it’s no worse than simple assault. Or, in judge-speak, the law “can be violated by conduct that bears a striking resemblance to non-turpitudinous simple assault, and little similarity to turpitudinous terrorizing threats.” It therefore doesn’t describe “a crime of moral turpitude.”

Why is this worth 1000+ words? First, lasers. Second, this is the kind of ridiculous overreach that we see DHS and DOJ making all the time these days. Do I care whether this guy gets deported? No. Do I think government lawyers should be required to interpret criminal laws in a way that makes sense? Yes. Also, do I think they should be allowed to seal the record in a case like this—which they have? No. Why is this record sealed? It is tempting to say they sealed it so they wouldn’t be embarrassed by their “evil laser” argument.

So that’s what I’m saying.

Florida Teen Claims Baggy Pants Saved Him From a ‘Gator