The problem is that it was tested 70 times. 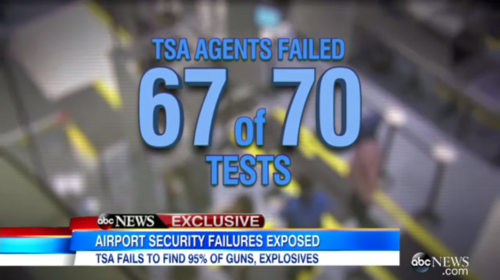 Arguably, this graphic from the ABC News report is not entirely accurate, though, because failing 67 out of 70 times is actually a 95.7% failure rate, not 95%. Of course, the banner actually says that "TSA FAILS TO FIND 95% OF GUNS, EXPLOSIVES," but you can't fail to find 95% of a gun, except that I guess if you have failed to find all of it you could also argue that you have necessarily not found 95% of it, or any lesser included amount, really. It's all in how you look at it.

Perhaps the TSA will look at it as an improvement over past results, and because it has been so remarkably incompetent for so long its spokesthings could actually say that with nearly straight faces. Back in March 2006, which was already almost five years after 9/11, we learned that government investigators had tried to smuggle bomb parts through security checkpoints 21 times and had succeeded 21 times. Or, to put it another way, the TSA had succeeded in detecting them approximately no times.

Almost exactly seven years and many billions of dollars later, I noted another series of tests with similar results. Although in that case the TSA did detect one of four investigators who tried to smuggle bombs onto planes—a bomb-detection failure rate of just 75%—my respect for its efforts was tempered somewhat by the fact that the guy they caught "was detected with an IED hidden inside a doll [that] sources told the [Washington] Post … had wires sticking out of it and was quite obvious." So, in terms of actual operational success I'm still counting that one as a no.

I therefore have little doubt that the TSA will spin this as a sign of improvement, since compared to its earlier efforts its success rate has gone up substantially. You might even say "infinitely" or "incalculably." Yes, that's it: TSA would like to point out that its success rate has increased by an amount that is literally impossible to calculate.

On the bright side, it has successfully detected people openly carrying Arabic flashcards. To my knowledge, it gets those people 100% of the time.