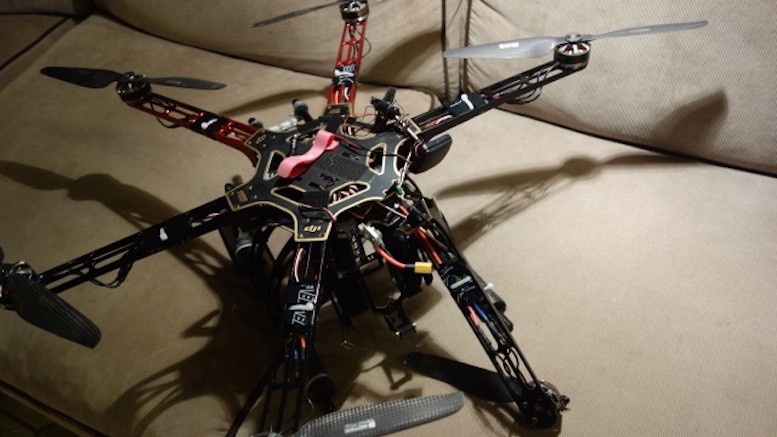 Many of you will be outside this weekend, so a little drone advice seems timely. Or maybe it’s shotgun advice. Take your pick.

Ars Technica reported recently that a drone operator in California had prevailed in a legal dispute with the man who killed his drone. In a one-sentence order, the local small-claims court held that the man “acted unreasonably” when he directed his son to blow the drone out of the sky with a 12-gauge (which his son promptly did).

According to the report, Eric Joe lives in San Francisco but was in Modesto visiting his parents when this occurred. He brought along what he described as “a homemade hexacopter drone” (seen above post-shooting; picture by Eric Joe). On November 28, a hexacopter took to the skies. Three minutes later, after a loud bang, a quintacopter fell back to earth.

When Joe went out to retrieve it he noticed that his parents’ next-door neighbor, Brett McBay, was holding a shotgun, and Joe put two and two together. “I asked: ‘Did you shoot that thing?'” he told Ars Technica. “He said, ‘Yeah, did we get it?'” They had, and with a single shot.

Although the drone wasn’t moving very fast, Joe was still properly impressed, as he said in an email to McBay that evening:

It was nice to meet you and your son. I wish it could have been under different circumstances, but I have to give credit to the McBay school of marksmanship. Still, I’m pretty bummed that I just built this hexacopter only to have it shot down. Also, it was a little disconcerting to know that the spread of the birdshot/buckshot was in my direction…. Good news is that the more expensive components … are intact.

The less-good news was that Joe wanted McBay to pay for the damage, which he estimated at $700.

With all [due] respect $700 dollars seems excessive. Perhaps in SF it’s normal for folks to have drones hovering over their property but we live in the country for privacy. I will be willing to split the cost with you but next time let us know [you’re] testing surveillance equipment in our area. I’ll drop a check [off] this afternoon.

Joe then wrote back with a response providing further important facts:

I’m sorry, but I must insist on full payment for equipment you damaged, as you shot it when it was above my property. The aircraft’s GPS data positions it clearly above our orchard. Additionally, the hexacopter crashed next to our driveway, ~203 feet (per Google Maps) from the dirt road that separates our respective properties.

I also dispute your characterization that I was “testing surveillance equipment.” There was no camera on the hexacopter, and had a camera been mounted, the price for repairs would have been an extra $300. Just as you asked me to give the courtesy of notifying you of my flying activities, I also ask you the courtesy of not shooting live ammunition in our direction. This is the third time discharge from your firearms has hit our house and property. The first incident left a bullet hole in the door by our garage. The second incident occurred last Thanksgiving when birdshot from your skeet shooting activities rained into our backyard. The third, of course, being what we’re currently discussing.

I’m hoping to resolve this in a civil manner. An entirely new rig would have cost $1500. Instead, I’m just asking that you pay for what you broke. Let me know if you wish to discuss further.

This tells us at least two important things: (1) the parties dispute the drone’s location at the time of the murder, and (2) Joe is related to at least one lawyer. I deduce #2 from the following, among other evidence:

Of course, Joe himself is almost certainly not a lawyer, because (1) his first email was quite normal and (2) he built his own hexacopter. So we can assume he got a third party involved. Further, only about 90 minutes elapsed between McBay’s email and the response, so Joe found this lawyer very quickly and on the day after Thanksgiving. That means the person is most likely a relative, either one present for Thanksgiving in Modesto or who Joe could feel comfortable contacting over the holiday for quick legal advice and a little ghost-writing.

Anyway, this message was successful only in irritating McBay—thus raising my lawyer-involvement estimate to 99.999%—and ended negotiations.

The court ruled McBay had acted unreasonably “regardless of whether [the drone] was over his property or not.” It thus apparently accepted the argument of Jesse Woo, described in the report as “Joe’s cousin and attorney” (told you so), that even if the drone had been trespassing, one is “only privileged to use reasonable force in defense of property.” The court seems to have found this privilege wouldn’t apply and so McBay could be liable even if the drone was over his property.

I think reasonable people could disagree about this. Shooting a human trespasser who’s not threatening you would be unreasonable, but this was just a drone. In that context, it does seem to matter whether it was trespassing. Can I really not shoot down an unmanned hexacopter that has invaded my airspace? There’s no jury in small-claims court, which was probably a good thing for Mr. Joe here.

I have my doubts about the claim that the drone wasn’t trespassing. Joe’s email says the drone crashed “~203 feet” on his side of the property line, but according to the Marine Corps the effective range of a 12-gauge is only about 150 feet—and that’s when a Marine’s using it. Something doesn’t add up there. Also, while GPS data is pretty accurate these days, I also have doubts about the GPS tech in this homemade drone. So a jury might have believed the thing was trespassing, and in that case might have found the armed response reasonable. Again, just speculation.

But that speculation—and a warning to drone users—is supported by Oklahoma’s SB 492, a pending bill that would make landowners defending their airspace (generally, below about 500 feet) immune from civil liability for killing a trespassing drone. “Drone” is defined to include only those carrying a recording device, but how are you supposed to tell from the ground whether an intruder has one? So, not that the Oklahoma Legislature is necessarily reasonable, but I do think a lot of people would say that, in this situation, you could shoot first and ask questions later.

I hasten to add that to my knowledge, no state yet has such an immunity in place, so my advice would be to resolve any drone disputes through negotiation, not violence. You probably also want to get flight clearance beforehand, though, especially if you live next door to a marksman.

Another Defect in Virginia’s Reckless-Driving Statutes