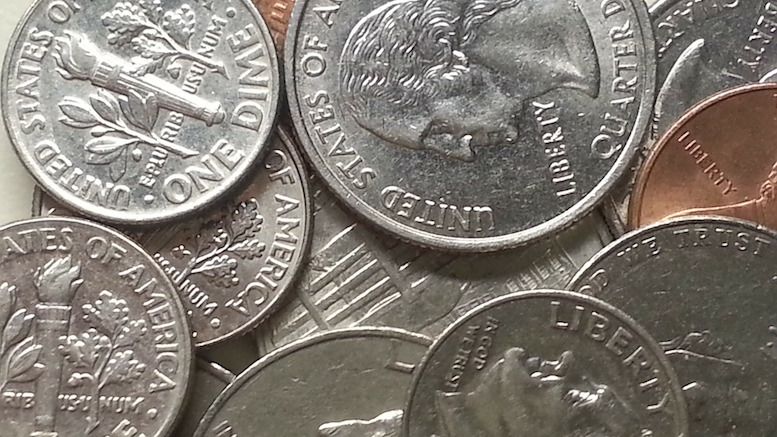 The U.S. Attorney’s Office in Birmingham announced this week that it had charged a former employee of Brink’s with stealing $196,000 from a federal reserve bank. Not that big of a deal as these things go, except that it was all in quarters. 784,000 quarters, to be exact.

The sheer number of quarters is more impressive than the dollar amount, but what I was really interested in was the weight involved. According to the U.S. Mint, a standard quarter weighs 5.67 grams (it also has 119 of those little ridges around the outside, which should make for some scintillating party conversation), so 784,000 of them would weigh 4,445 kilograms or just over 9800 pounds—not quite five tons of coins. The press release says that the guy stole these between Jan. 1 and Feb. 20, 2014 (“his last day of employment at Brink’s”), which means he averaged more than 192 pounds of coins per day. That seems pretty impressive—for him, at least, not for Brink’s, depending on how long it took Brink’s to notice that on average 15,372 quarters a day were slipping down into its couch cushions.

I assume they have people at the door whose job is to listen for employees who jingle, but then maybe this was one of those people.

The press release doesn’t say how he got the coins out of the building, but he hid the thefts for a while by filling coin bags with beads and leaving just enough quarters on top to pass a quick inspection. Each bag apparently holds $50,000 in quarters, so he would only have had to steal four of these bags—but, again, each one would weigh more than a ton. Well, I suppose they must have some giant coin-bag-moving machine there, which I assume looks like the claw in those old-timey arcade games, or at least I hope it does. Yes, I hope he used The Claw to move the coins into a waiting submarine staffed by cronies who all dressed the same, like on the old Batman show, but was then forced to dump all the coins in order to get away when the sub was attacked by a giant squid. So that’s how that ended. Ironic, really.

I didn’t have much luck trying to identify the largest heist ever that was entirely coins. (Internet searches tend to turn up stuff about bitcoin, which I’ll believe is real money when strippers start accepting it.) But I did learn that this is not the biggest coin heist by any means.

According to Slate, in 2005 police found no fewer than three million nickels buried in somebody’s backyard, which they surmised (correctly) was part of a shipment of 3.6 million nickels that had gone missing a couple months earlier. How that happened was no real mystery: a trucker picked up a sh*tload of nickels intended for a bank and then just disappeared. Police said they found the loot because they were investigating a possible pot-growing operation on the property and someone tripped over a bucket full of nickels.

So, does that seem like a lot of nickels? I thought so too until I found this story from 1939 about the arrest of eight men for what the district attorney (Thomas Dewey, who would later go on to not defeat Truman) described as “the systematic looting of 26 million nickels” from the New York subway. That’s a ginormous amount of nickels all right, although because there were a total of 30 alleged “nickel pirates” (seriously, that’s what they called them) and they stole the nickels over a five-year period, it seems less impressive somehow.

Finally, I also found this report from last December about a guy who stole 4.7 billion coins, but it doesn’t count because they were virtual gold pieces in the online game RuneScape. He apparently offered to pay $3,300 in real U.S. money for the not-real nerd gold, but instead he pulled a (fake) gun when the seller arrived and forced him to make the transfer. He successfully escaped back to his mom’s basement (I assume), but was busted a few weeks later when he tried the same scam on somebody who turned out to be an undercover cop. Turns out that quasi-stealing virtual money with a fake gun will get you time in an actual jail.

From the Docket: Alleged Failure to Supervise Knife Use

You Know, Some Appeals Really Aren’t “Worth a Shot”