Many have rightly praised Spider-Man for foiling that comic-book-store robbery in Australia last week (with the aid of a few super-friends), but some still question whether his brand of vigilante justice is always a good thing.

The robbery story reminded me of one from last November, when Spider-Man was arrested in Los Angeles after allegedly hitting a man on Hollywood Boulevard.  On that occasion, the masked crimefighter attempted to blend into the crowd after the assault.  That's not as far-fetched as it sounds, given that Hollywood Boulevard is probably one of the few places in the world where somebody could blend in while wearing a Spider-Man outfit. 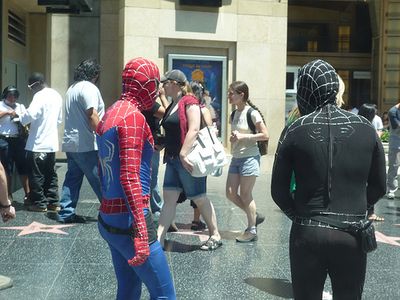 Even rarer: both are wearing fanny packs.

More specifically, police did not have trouble finding Spider-Man, but they did have trouble finding the right Spider-Man — when they arrived, they found at least four Spider-Men lurking among the crowd of costumed characters that works the boulevard hoping for tips from tourists.  The second one they unmasked was the suspect.

Police said that the victim decided not to press charges, but Spider-Man was booked anyway because it turned out there were existing warrants out for his arrest.  Bail for Spider-Man was set at $5,500.

According to the report, the crowd of celebrity/character impersonators normally gets along reasonably well, but tempers have flared from time to time.  "A few years ago," the report said, "the police had a 'super-hero' summit to try to reduce tensions."

Reckless-Driving Acquittal Again Shows Proofreading Is Not Just for Dorks