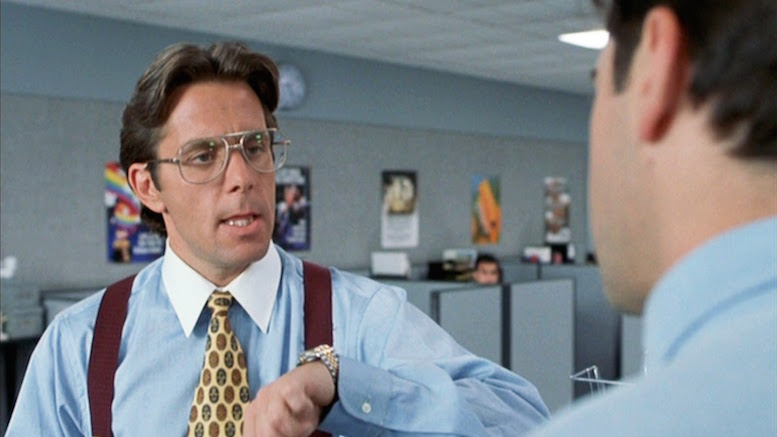 The Monty Python sketch “Happy Valley” (video; audio with F-bomb) starts like this:

Once upon a time, long, long ago, there lived in a valley far, far away in the mountains, the most contented kingdom the world had ever known. It was called “Happy Valley,” and it was ruled over by a wise old king called Otto. And all his subjects flourished and were happy, and there were no discontents or grumblers, because wise King Otto had had them all put to death along with the trade union leaders many years before.

A great scene follows in which a man is convicted of violating the Happiness Act, which everyone but him thinks is hilarious.

That seems appropriate to start off this post about the National Labor Relations Board’s ruling on April 29 that a company cannot have a rule requiring its employees to be “positive,” or more specifically “to maintain a positive work environment by communicating in a manner that is conducive to effective working relationships.” Like in Happy Valley, the rule didn’t and couldn’t mandate actual happiness, it just threatened punishment for anybody who didn’t act happy enough.

Section 7 of the National Labor Relations Act (summary PDF) says that employees have the right to organize, bargain collectively, and “engage in other concerted activities for … mutual aid or protection,” or not to do those things if they don’t want to. Section 8 then forbids employers from doing things that interfere with those rights. The NLRB is the agency that enforces the Act, partly by ruling on complaints like the one involved here. (You now know everything I do about this topic.)

In this case the union complained, among other things, that the Happiness Rule was ambiguous and could be interpreted by an employer to preclude any (my words here) griping, bitching, and/or moaning about work conditions, and that it was broad enough to jeopardize or “chill” even justified collective griping, bitching, and/or moaning. The Board agreed:

We find that employees would reasonably construe the rule to restrict potentially controversial or contentious communications and discussions, including those protected by Section 7 of the Act, out of fear that the Respondent would deem them to be inconsistent with a “positive work environment.”

You should be aware that it distinguished between this situation and narrower rules that prohibit things like “insubordination” or a negative attitude that is actually “disruptive … or has a negative impact on guests.” That isn’t protected conduct. But the Board decided this one was sufficiently broad to either punish protected conduct or discourage it, and that this was enough to invalidate the rule:

[E]mployees would read the rule in context with other work rules, found unlawful here, prohibiting employees from “arguing” and from making “detrimental” comments about the [employer]. Because labor disputes and union organizing efforts frequently involve controversy, criticism of the employer, arguments, and less-than-“positive” statements about terms and conditions of employment, employees reading the rule here would reasonably steer clear of a range of potentially controversial but protected communication in the workplace for fear of running afoul of the rule.

You should also be aware that your workplace may well not be subject to the NLRA, although you might or might not be able to argue for similar protections in some circumstances under the First Amendment. Or you may be an “at-will” employee, in which case you’re probably screwed. Like I said, you now know everything I do about the topic, basically, so you must gripe at your own risk.

As this article on the decision points out, there are in fact “obvious benefits to maintaining a positive, carefree work environment,” including but not limited to increased productivity (all else being equal). To maximize those benefits, though, the positivity should be real. Somebody may have missed the memo on that, but it’s worth circulating again.