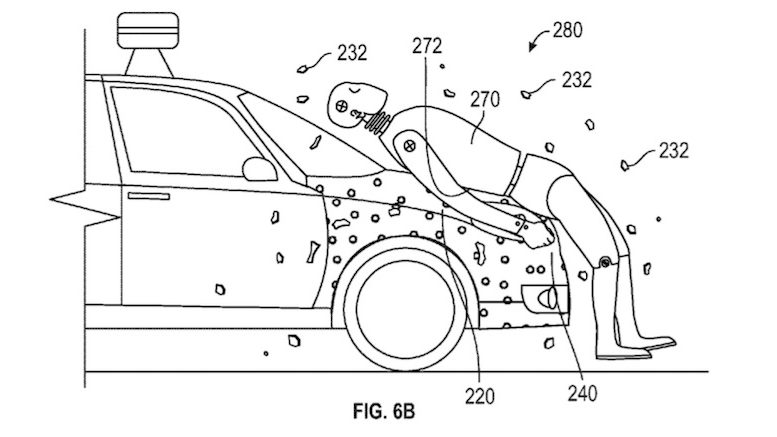 So at first glance that image may not inspire a lot of confidence in Google’s self-driving cars. In case you’re thinking it’s meant to show a person calmly reclining on the hood of a car while being showered with rose petals, it is not. It’s meant to show the moment after a person (270) is struck by a self-driving car; he is being carried along on the hood (220) while debris (230) flies off. Has Google patented a method of directing robot cars to take out irritating people in spectacular ways? No (or at least not that we know of).

It has patented a method of making sure a person sticks to the hood if there is an accident.

While this is kind of hilarious, there is a valid idea behind it. As Gizmodo reported yesterday, the idea is to protect a pedestrian (or cyclist, or whatever) from secondary-impact injuries caused after the impactee is thrown back off the vehicle. As a spokesperson for the American Physical Society told Gizmodo, “Getting hit by a car once is much preferable to getting hit by a car and then the ground and another car,” and I’m not sure they needed a physicist to establish that but it seems right. Of course, it would be ideal if the self-driving car could not hit pedestrians in the first place, but no matter how good it is, that is going to happen sooner or later.

Hence U.S. Pat. No. 9,340,178, which the PTO granted to Google yesterday. The sticky car—sorry, “Adhesive Vehicle Front End for Mitigation of Secondary Pedestrian Impact”—would have, well, an adhesive front end, with the adhesive covered by an “eggshell-like” coating. Google says the coating would protect the vehicle from “road debris, dirt, water, and other environmental factors,” but I think we’re really talking about not having the entire front end covered in bugs within the first ten minutes. Now, this coating would have to be strong enough to resist things you don’t want to stick, like debris, rocks, birds, turtles, or the enormous owl that attacked my car in Utah one night several years ago, although I may have hallucinated that whole thing because of the peyote. But the coating also has to be fragile enough to be sure that a person you hit would break through and reach the flypaper. That seems like a tall order.

Similarly, the adhesive would need to be strong enough to hold a human being in place after an impact, so, pretty strong. And yet, as the patent states, “It is also desirable to have the adhesive in the adhesive layer release after a short period of time to allow for the removal of the pedestrian from the vehicle.” Yes, it would seem to defeat the purpose if you saved someone from secondary impact only to doom them to a life of riding around on your hood. So that is another challenge.

On the other hand, the APS spokesperson suggested that extreme stickiness would have another benefit: “having a person stuck to the hood might prevent a human driver from fleeing the scene”; that is, it would deter hit-and-run accidents. Well, maybe. I think the only way to be sure, though, is to leave the person stuck to the hood until the case can be brought to trial. “Ladies and gentlemen of the jury, I give you Exhibit A. The prosecution rests.”

Of course, a lot of patents are awarded that are never actually put into use, and in some cases that is probably for the best. So this does not mean there will be sticky cars out there soon, or ever. And there are likely better alternatives for increasing pedestrian safety, one of which would not be the idea floated by designer Dan Sturges in the Gizmodo article. “Given their role with Android OS,” Sturges said, “[Google] could have the world’s smartphones telling pedestrians when they are at risk of getting hit.” Yes, or pedestrians could have their eyes do it. But, by all means, Google, have an app that encourages people to look at their Google phones while crossing the street so they don’t get hit by Google self-driving cars. If you’ll hire me to handle your litigation, that is, otherwise don’t do that. Actually, don’t do it at all, it’s a terrible idea.

But hire me if you do.

TIP: Avoid Interview Statements Contrary to What You Said at Your Sentencing Hearing

Sarah PalinTM Having Trouble With Registration