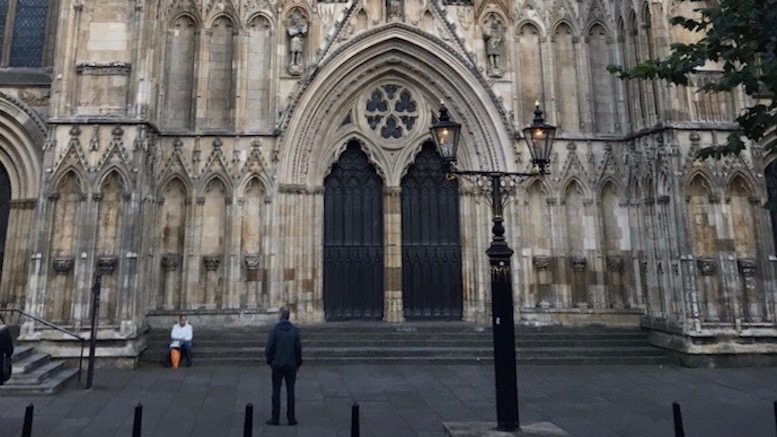 A forlorn former bellringer (possibly) gazes wistfully at the Minster (photo: me)

Today I’m in York (no, the old one), and I was writing up an event from halfway around the world when I noticed there’s a major controversy raging not 50 meters from here at York Minster, the city’s awe-inspiring ancient cathedral. Apparently, last week the archbishop sacked all 30 of the Minster’s current bellringers at once, leaving the bells silent until a new team can be recruited and trained. Not only that, the reason for the mass firing (they were all fired at once, that is, not during Mass) is unclear. Church officials said they had commissioned a report that identified certain bellringer-related “health and safety risks,” and cited the report to justify its action. But it has not released the report and will not say what risks it supposedly identified.

Not that a church would ever engage in a coverup, but this seems very mysterious.

For years the bells have been rung by the volunteer members of the York Minster Society of Change Ringers, described by the Minster’s own carillion player as “one of the finest ringing groups in the country, if not the world.” But all 30 of them were let go, effective immediately, in an “emergency meeting” held last Tuesday. The ringers said they were shocked at the announcement, which left some of them in tears. In what I thought was a nice touch, the volunteers all got a letter that began with the motto, “York Minster invites everyone to discover God’s love,” and then told them they were all fired.

Officials cited “health and safety concerns” at the time, but also deployed a lot of bureaucratese suggesting that internal politics were also involved.

“The Chapter of York is committed to having a fully trained, motivated and engaged body of staff and volunteers by 2020,” the Minster said in a statement. “Since 2014 we’ve been working with our groups of volunteers to introduce a consistent standard of recruitment, induction, training and development,” because “it is critically important to ensure that there is a consistent approach to health and safety, governance and risk management across all of our volunteer teams. In order to make these changes, we sometimes need to close existing volunteering roles so that we can move forward with the new processes. This is what has happened with our bellringers.” Wait, what happened with your bellringers? Many words, almost no information.

Still under fire this week, the Minster released another statement that only deepens the mystery:

[T]he Chapter … is responsible for ensuring that the Minster is a safe place for everyone who steps inside. This means managing and minimising risk to people and the building and includes safeguarding, health and safety and security.

Earlier this summer, it was necessary for the Chapter to take action regarding a member of the bell ringing community on safeguarding grounds…. The decision was taken in line with advice from safeguarding professionals, and with regard to national policies and guidance, including the Church of England’s, on minimising risk to children, young people and vulnerable adults.

Some members of the York Minster Society of Change Ringers have consistently challenged the Chapter’s authority on this and other important matters. Repeated disregard of the Chapter’s attempts to fully implement the Church’s national policies for safeguarding, health and safety and security meant that decisive action was required…. This is why the Chapter took the decision to disband the bell ringing team….

Again, this provides virtually no facts—although it does a pretty good job of implying that one of the bellringers posed a risk to “children, young people and vulnerable adults,” without saying exactly how. Maybe “safeguarding” has a specific meaning over here that I’m not familiar with? But even if one of them did … something, why would that justify firing all 30? That may be where politics comes into it.

In its response to that statement, the YMSCR did mention an earlier “action regarding a member of the bell ringing community,” and said some of them had privately expressed concerns that “due process” had not been followed in that case. (I assume they meant this generally, since a volunteer would probably not be entitled to due process, strictly speaking.) It was as a result of this griping, they believed, that “the entire team had their volunteer agreements terminated.” That suggests the Minster just got tired of dealing with them, and decided to punt everybody and start over. (It has said they can reapply individually if they would like, which presumably means they aren’t individually a threat to any children or old people.) The YMSCR also said, in an update, “Please note that, contrary to some reports, to our knowledge there is no ongoing investigation into any member of YMSCR, past or present.” Also seems a bit carefully phrased, to be honest.

Yesterday, Rachael Maskell, the MP for central York, said she believed the mass termination was “disproportionate”—I guess meaning they should only have terminated a few to make an example for the rest—and called for further dialogue on the issue. So while I’m not sure volunteers have any legal rights here—though if there was an “agreement,” maybe it provides otherwise—at least the bellringing dispute has been elevated to Parliamentary level.

Well, the Minster is closed right now because they’re consecrating a couple of new bishops, but it reopens in a few minutes, so I’ll run over there and see if I can get any further comment. I’m sure they’ll be very forthcoming once I identify myself.

Further update: A report today identifies the bellringer who was let go earlier this year, apparently based on certain allegations that resulted in a police investigation but no criminal charges. It sounds like the other bellringers’ complaint about the lack of “due process” in his case may have been the last straw that prompted the Minster to boot all of them. The mass firing, of course, has now drawn international attention to the mini-scandal that they wanted to keep quiet in the first place.