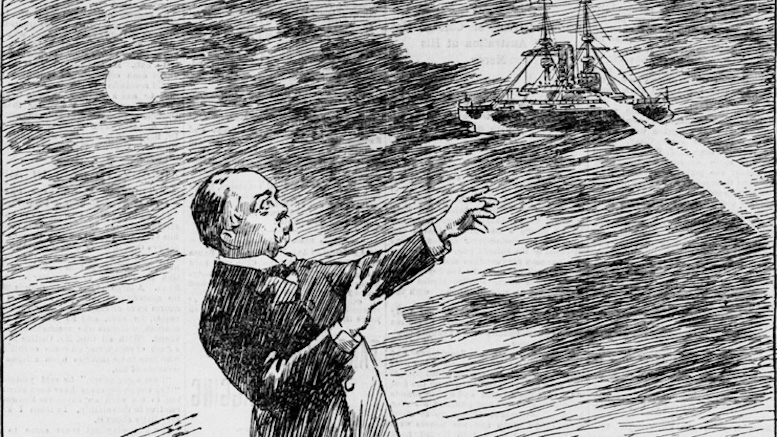 In October, the mayor of Châteauneuf-du-Pape (“the Pope’s new castle,” which was true in the 14th century), said he had no plans to repeal the 1954 bylaw that absolutely prohibits UFOs from flying over or landing in town.

Those responsible admit this was passed as a publicity stunt, but on the other hand, they haven’t had any trouble with UFOs since then, so maybe it’s working.

As the Mysterious Universe website reported on October 31 (citing this French source), the law was enacted in late 1954 after a local man reported that a “cigar-like machine” had landed near his house. The New York Times reported the incident on September 15, the day after the landing: 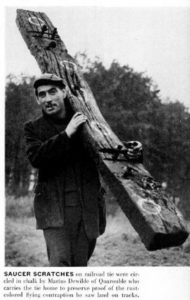 PARIS: A spate of reports of extraterrestrial visitors to France … spread yesterday [Sept. 14] with the speed of a space-cadet. Marius Dewilde, a metal worker, … made known yesterday that he had seen what seemed to be two Martian visitors at his garden gate last Friday night. They alighted from a cigar-like machine which came to rest on the railway just outside his domicile. M. Dewilde described the visitors as of small stature, clad in something resembling a deep-sea diver’s costume. They had the appearance of human beings…, but when he approached them the machine in which they had arrived set forth with a green beam of light which paralyzed him. When he recovered his sensibilities the cigar was taking off and the two beings had disappeared. The authorities have since noted unusual marks on the cross ties of the railway as though they had been made by the tail skid of some flying machine.

This report is interesting not just because it’s further evidence of the crimes committed by illegal immigrants, or because it shows that the New York Times uses only one space after a period as does every other true representative of modern human civilization, but also because of the somewhat antiquated description of the “Martians” and their machine.

As io9 explains, the “flying saucer”/grey-alien thing that’s standard today is a fairly recent development. The former mostly post-dates a 1947 report of “saucer”-shaped UFOs, and the latter didn’t become standard until the 1960s and ’70s. One of my favorite things about this is that back in the 1950s, aliens were commonly described by “contactees” as being tall white people, a description possibly influenced by the tall white person who got out of the saucer in The Day the Earth Stood Still (1951) (depicting still more crimes by an illegal immigrant). This shows that descriptions of things like this are greatly affected by popular culture, not necessarily than facts. Or maybe the white ones just don’t visit anymore, who knows. 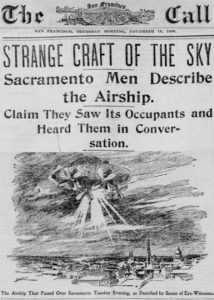 But the alleged UFO shapes support the former explanation. Back in the 1890s, for example, the scary things in the sky were generally said to be cigar- or egg-shaped, not saucers. They also tended to have small wings or fins. In other words, they looked like airships, which people knew about partly because of a bad but widely read Jules Verne novel published in 1886. Again, people tend to see what they expect to see.

In any event, Marius reported his encounter with le cigare volant on September 14, and it was being reported around the world by the next day. Clearly, it was time to take action. And within a month or so, the town’s mayor did just that. Article 1 of the new bylaw, which is still in force (sort of) today, strictly prohibited overflights and landings by any “aircraft known as flying saucers or flying cigars,” whatever their nationality; and Article 2 stated that any such aircraft that did land would be immediately impounded. Article 3 put certain local officials in charge of enforcing this decree, apparently delegating to them the task of figuring out exactly how to do it.

Sadly, or not, this was admittedly just a publicity stunt (also the most likely explanation for the sasquatch-protection ordinance that I named my book after). UFOs were in the news at the time, according to the former mayor’s son, and “my father had this idea of arrest at a congress with other mayors of France.” It was “a great commercial,” he explained, “and free.” Presumably they enlisted Marius to make the report, or at least pose for the picture, and the rest is l’histoire.

Iraqi Parliament Actually Has a Quorum

Scalia: Equal Protection for Ladies? Nobody Voted for That