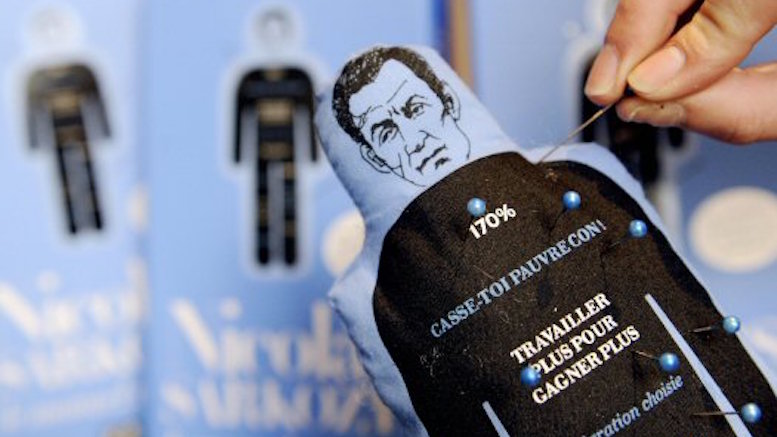 French president Nicolas Sarkozy has triumphed in his legal battle against a company that is marketing a book and voodoo doll using his image, reports said this week.

He has been awarded one euro.

In October, Sarkozy’s lawyer sent a cease-and-desist letter asserting that Sarkozy had “exclusive and absolute rights over his own image” and that he would sue if the doll was not taken off the market. It wasn’t, and he did. (This was apparently his second legal action involving the doll, which might explain what looks like swift action by French courts.) Sarkozy’s lawyer argued not only that the president owned the right to his image but also that the doll posed a threat because it might “provoke violence” against him. I think the real threat might be to Sarkozy’s tough-guy image, if he has to send his lawyer out to say he is afraid somebody might stick him with a pin.

On November 28, an appellate court ruled that K&B Editions had misappropriated Sarkozy’s image, but also ruled that the requested ban would be “disproportionate” and would “compromise freedom of expression.” It also affirmed, or at least did not disturb, the lower court’s ruling that the case came within what it called “the right to humor.” The court awarded Sarkozy one euro in nominal damages and about $2,000 in legal fees.  But it said the doll could continue to be sold.

The order also requires that the package carry a bright-red sticker reading “Judicial Injunction,” and a warning that the book and doll constitute an attack on Sarkozy’s dignity. The required notice reads:

It was ruled that the encouragement of the reader to poke the doll that comes with the needles in the kit, an activity whose subtext is physical harm, even if it is symbolic, constitutes an attack on the dignity of the person of Mr. Sarkozy.

Certainly the court could not have been thinking that its ruling, sticker and warning label would add to the notoriety of the product, which is already well-known due to the publicity Sarkozy himself ensured with his lawsuit. But that has been the effect. The product has jumped to the top of Amazon.com’s best-seller list (in France). K&B Editions said that its first 20,000 dolls sold out in three weeks, and that another 20,000 will be ready by December, complete with sticker and label.

Still, Sarkozy’s lawyer said that his client was satisfied with the ruling because it had affirmed his right to control his image, which seems a little ironic given that the case has also ensured that tens of thousands of people will be poking that image for months to come.