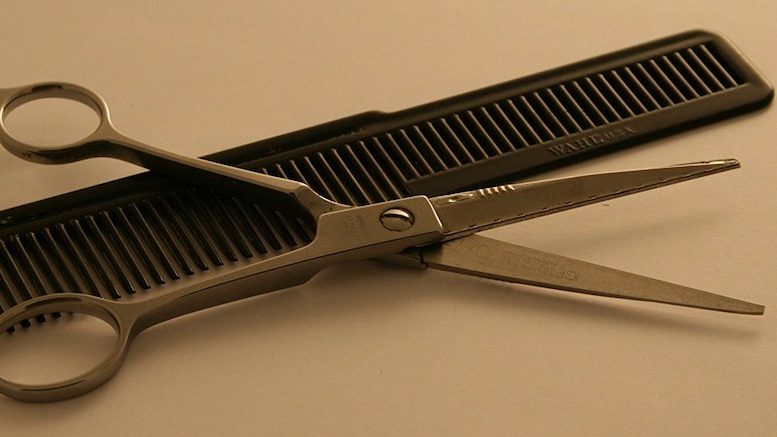 Also the tools used to remove it, but don't buy them either

Here’s another update, one that I think deserves its own post.

As I mentioned way back in 2005, Neil Armstrong threatened to sue his barber after he found out the guy had collected some of his hair and sold it to a collector without Armstrong’s permission. See “That’s One Small Snip for a Barber, One Giant Check for Barberkind” (June 1, 2005). Armstrong was an extremely private person despite his celebrity, and after the barber refused to return the hair—or claimed he was unable to because he’d already sold it—Armstrong got his lawyer involved.

In the letter, which you can see at The Smoking Gun, Armstrong’s lawyer argued that the sale was a violation of an Ohio law that requires consent before using an individual’s “persona” for commercial purposes until 60 years after his or her death, and provides a cause of action against the violator. “Mr. Armstrong’s first preference,” the letter stated, “would be the return of his hair,” but if that could not be done, “Mr. Armstrong proposes that you donate, to a charitable organization of his choice, an amount equal to the proceeds” earned from the sale (apparently $3,000). Reports at the time said that the barber, Marx Sizemore, had refused to do this—it’s honestly a little hard for me to fathom saying “no” to a request by Neil Armstrong, and this guy did it twice—but that the buyers had offered to make the donation instead. I’m still trying to find out whether this donation ever happened (likely) or if Armstrong ever sued (unlikely), but it appears that he ultimately didn’t get his hair back.

I say this because, at least according to Paul Fraser Collectibles, today you can buy not only some of Armstrong’s hair but also the very scissors and comb that Sizemore allegedly used to cut it. This is available right now on Amazon.com for $38,611 (but you get free shipping). On its own website, the company also offers individual pieces of Armstrong’s hair at a rate of £399 for each half-inch strand (it’s written in the singular but I’m guessing they have more than one strand for sale).

Authenticity of course is important in the sale of collectibles, and the company says that all sales involving Armstrong’s hair will include a copy of the barber’s sworn testimony declaring the hair to be genuine. And not just any barber, but Armstrong’s “barber of record”:

This is to inform you that I have been the barber of record of Neil Armstrong since October 1999. I generally cut his hair once a month. This is the Neil Armstrong who was an astronaut for N.A.S.A. and the first man to walk on the moon. I do attest that the hair clippings submitted to you are his hairs that I cut from his head.

The barber of record! That’s the first time I’ve heard that term, but I can assure you it does not mean what they are suggesting it means. In fact, except for a random mention on Yelp, a Google search turned up only one other use of the term anywhere—on this New York form having to do with apprentice barbers and their supervisors. So one could say that in states that require barbers to be licensed, there might need to be at least one “barber of record.” That does not mean said barber’s testimony would somehow be especially reliable, my friends. Sworn testimony is still evidence, of course, so fine, if that’s what it is. But the use of “barber of record” here is just attempted legalese of the most hilarious kind.

So is there anything Armstrong’s estate could do at this point? Well, the Ohio law has a four-year statute of limitations, and any claim involving the 2005 sale itself may have been waived anyway if the donation was made as requested. But the current seller is not the one who bought the hair in 2005, and the scissors and comb weren’t at issue then anyway. If these are fairly recent transactions, and/or if the estate wasn’t aware of them until now—and it’s either aware already or will be shortly, because I just sent Armstrong’s lawyer an email—then legal action might be possible for that reason. This also assumes the current seller is subject to personal jurisdiction in Ohio or that there is some basis for applying the Ohio law elsewhere, which are not small assumptions.

Then there’s the barber. There’s probably no claim now for his 2005 acts, but if he provided his testimony more recently in connection with the current sale, that might be different. And he is the “barber of record” in this matter, after all. Shouldn’t he have to take responsibility for the consequences of his barbering?

Does it matter? Well, it obviously mattered to Neil Armstrong, so it might very well matter to his estate. And if it mattered to him, that’s good enough for me to try to cause trouble. Plus, selling celebrity hair is kind of creepy. So please don’t buy Neil’s hair (or the comb or scissors), if you were otherwise disposed to do that. I’ll update further if I hear from the estate.

What Changes Will the Pope Make to the Conclave Rules?