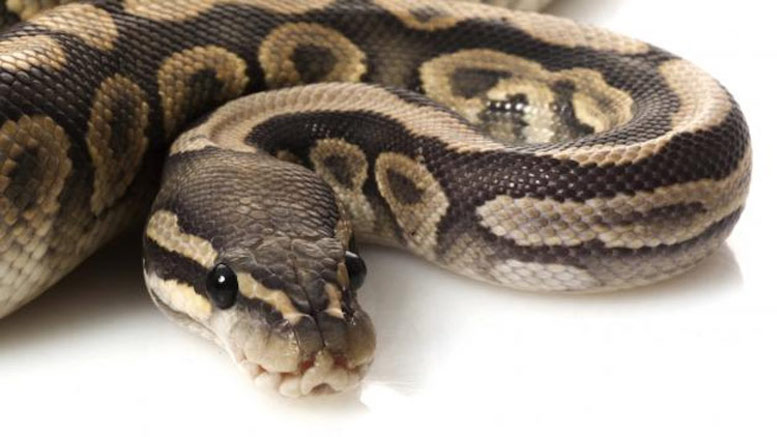 Stop putting air quotes around that because it isn’t a euphemism. A man in Sioux Falls, South Dakota, is upset because he got a ticket on April 1 for allowing his four-month-old python to “run at large” in a local park, according to the Argus Leader.

“It was April Fool’s Day,” said python owner Jerry Kimball, “so I thought he was playing a joke.” Not the snake—they don’t joke—but the animal-control officer who told him the python could not be off-leash. “He was literally asking me to put a rope around my snake,” Kimball said. “I was like, ‘dude, no.’ I was dumbfounded.” Dude still wrote him a $190 ticket. Dude!

Some of the upsetness seemed to be because the ticket is for violation of section 90.002 of the city ordinances, entitled “Running at Large Prohibited.” He was like, dude, snakes can’t run. They don’t even have legs! And pythons, at least, can’t even slither very fast. Okay, but the ordinance itself doesn’t say anything about running:

Except on property designated by the city as an animal off-leash area, it shall be unlawful for any person to have any animal which is owned, kept, harbored or allowed to be habitually in or upon the premises occupied by him or her or under his or her control to be at large and to go in or upon the private premises of others or upon any public property.

This text sucks but does seem to make it unlawful to let “any animal” that you keep at home, or at least tolerate its habitual presence therein, be “at large … upon any public property.” (It actually says it’s unlawful to “have any animal … to be at large,” which doesn’t even make any sense, but whatever.) So, a snake is an animal and the park is public property. What does it mean to  allow it to be “at large”?

“At large” is a term we generally associate with criminals, or at least I do, but it is also frequently used in statutes to refer to animals getting loose and running about freely. Here, though, we don’t need to speculate about what “at large” means because another ordinance defines it:

(1)   An animal when off or away from the premises and not under the control of the owner, possessor, keeper, agent, servant, or a member of his or her immediate family by a leash.

(2)   An animal when on the premises of the owner, possessor, keeper, agent, or servant if not attended by a competent person unless the animal is chained, restrained, enclosed, or confined in a manner preventing it from leaving the premises.

The same ordinance also helpfully defines “leash,” in case you don’t know what one is, as a “cord, thong, or chain, not to exceed six feet in length, by which an animal is controlled by the person accompanying it.” There is no exception for animals that are cylindrical and so likely to slide right out of a leash anyway, but the officer in charge of the animal-control department said it would be fine to take snakes to the park as long as the owner held it or kept it in a container. You probably want to get that in writing, though, ’cause it says “leash.” 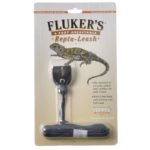 I had trouble finding any snake leashes currently for sale, which I thought was surprising given what I know of the internet, but I did find the amusingly named “Fluker’s Repta-Leash,” which is apparently engineered for lizards but might work for snakes too. Or you could rig up something with an elastic band or sheath, maybe.

If you do, you might just get rich because it looks like U.S. Pat. No. 6490999B1, “Collar apparatus enabling secure handling of a snake by tether,” has expired: 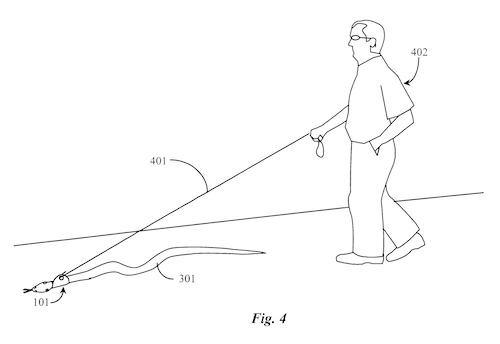 “The concertina motion of a snake coupled with an ability to alter the shape of its circumference enables it to move through and escape any known annular restraint such as a neck-style collar,” the patent description points out, which is the problem I pointed out above. “Therefore, what is clearly needed is a collar apparatus and mechanism that enables a user to collar a snake securely such that it may be tethered and allowed to move about un-hindered….” Clearly.

Let me know if you need a patent attorney for your snake tether, if you invent one. That’s not my field but I know several to whom I’d be glad to refer any potential snake-tether patent matters.

No End in Sight to Feud Among Rival Santa Groups