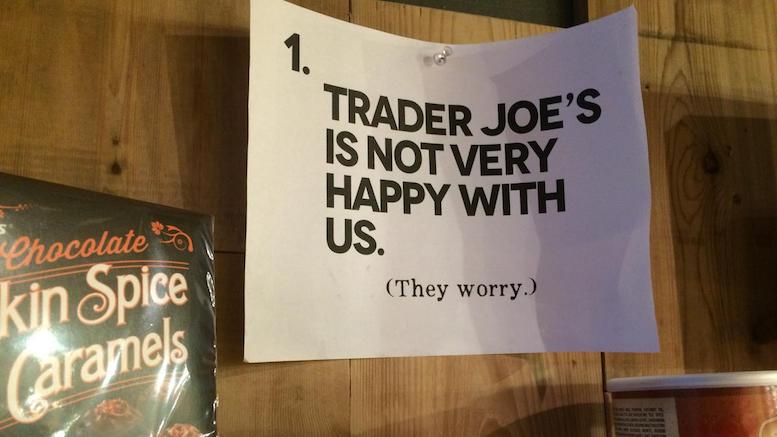 A sign that formerly appeared in Pirate Joe's in Vancouver (image: priceonomics.com)

As you may recall, for the past few years a man in British Columbia has been traveling to the U.S., buying lots of stuff from Trader Joe’s (which doesn’t operate in Canada), and then taking it back and reselling it at home in Vancouver for a profit. For a reason I’ve never quite understood, Trader Joe’s is really upset by this. See “Why Is Trader Joe’s Suing Its Best Customer?” (Aug. 21, 2013).

A federal district court in Seattle held a few months later that, in fact, Trader Joe’s hadn’t explained how “Pirate Joe’s” competition was harming it here in the United States, which is a required element of the Lanham Act claim it brought. Pirate Joe (a.k.a. Mike Hallatt) was spending a lot of money at Trader Joe’s—which is presumably something it wants people to do—and then reselling the products in Canada, where Trader Joe’s doesn’t operate. What’s the problem, exactly?

In 2016, the Ninth Circuit held that the problem was, at least theoretically, that if somebody got sick in Canada because Pirate Joe’s didn’t handle food correctly, and then news of this illness traveled across the border, then people might (wrongly) believe it was Trader Joe’s fault and decide not to shop at its U.S. stores. Had this ever happened? No. Could it ever happen? I guess, because Americans will believe any goddamn thing, or at least some will. But that theoretical possibility seems way too speculative to me to justify a lawsuit.

I thought the footnote concluding that “foreign” may also mean “domestic” was pretty good evidence that the reasoning in that decision was a little shaky.

Anyway, that court’s ruling sent the case back for further proceedings, and those have been proceeding ever since. According to reports this week, the case was set for trial in November, but was resolved on Wednesday when the two Joes reached some kind of a deal. The exact terms of the settlement have not been disclosed, of course, but Hallatt has agreed to shut down his allegedly semi-piratical operation, and presumably Trader Joe’s has paid him something in exchange. “They definitely didn’t want me to be a business,” Hallatt said, and as of 12:01 a.m. on Thursday, he isn’t.

Congratulations, I guess, to Trader Joe’s, for prevailing in its years-long quest to stop this dastardly foreigner from traveling here to spend hundreds of thousands of dollars in its stores.

Who Stole the Global Strategic Maple Syrup Reserve? And How?

Bill Would Ban Using Human Fetuses in Food, Just in Case Anybody’s Thinking of Doing That