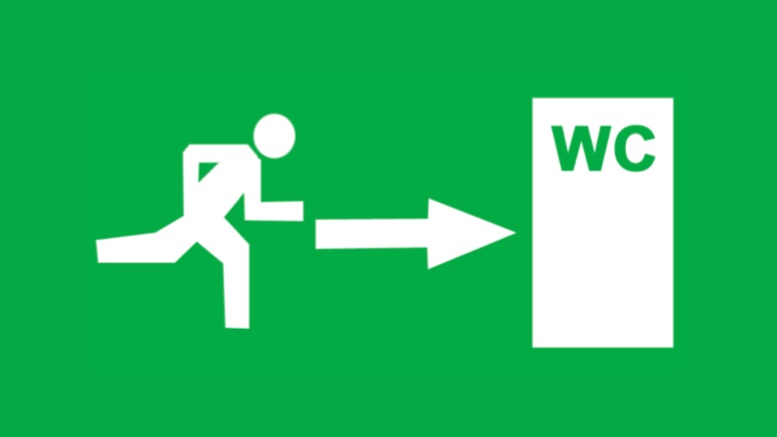 When I first mentioned this story, the suspect, who you will recall was suspected of “concealing illicit substances inside his body,” had already declined to engage in a bowel movement for 20 days. See “Suspect’s ‘Toilet Strike’ Enters Third Week” (Feb. 7, 2018). That seemed quite remarkable to me even then. I can’t claim to be an expert in the field (although I do have substantial practical experience), but the BBC quoted one who seemed to agree with my assessment.

“I’m amazed he’s held on for so long,” Trish MacNair of the Primary Care Society for Gastroenterology told the BBC on February 8. “It’s only a matter of time.”

That was a month ago.

And yet, on Monday, the Crown Prosecution Service announced that not only had the young man still not complied, it had decided to drop the drug-possession charges against him on grounds of (wait for it) “insufficient evidence.”

Essex Police, who like everyone else (including yours truly) had publicly mocked the suspect for being so stubborn given the inevitable outcome, had to adopt a different tone in a statement released on March 7. The saga began, they recalled, back on January 18 when the 24-year-old suspect first appeared in court (exclamation points obviously mine):

At that hearing, and in seven subsequent hearings [!], the court authorised the further detention of Mr Chambers (under section 152 of the Criminal Justice Act 1988) to enable him to pass drugs he was suspected to have inside him.

Mr Chambers was detained in police custody for 47 days. During this time he was routinely supplied with food [!] and water, received medical visits every day and comprehensive reports of his state of health were provided to the court…. His health, wellbeing and dignity [!] were paramount at all times. Despite this, nothing was passed [!] by Mr Chambers, who also routinely declined medical treatment and the opportunity to visit hospital.

And so, following a nearly six-week standoff, Chambers prevailed. Sort of:

On Monday March 5th, the decision was taken by Deputy Chief Constable BJ Harringon, following medical and legal advice, to release Mr Chambers from custody. The Crown Prosecution Service discontinued the charges against Mr Chambers in relation to possession with intent to supply a Class A drug and driving matters.

Mr Chambers was subsequently rearrested on suspicion of being concerned in the supply of a Class A drug and he was released on bail. Upon his release from our custody, Mr Chambers was taken by police car, in company with a medical professional, to hospital for treatment. We understand that since his release Mr Chambers has been treated in hospital.

I’m not sure I’d call this a “win-win situation,” but it is a reasonable resolution under the circumstances. The suspect gets the charges reduced, and can avoid dying, while the Essex Police get the evidence they’ve been waiting for (or at least I assume the hospital will locate it), and also avoid the public-relations embarrassment of having a suspect who they previously mocked possibly die in custody, after having displayed what they would have to admit is a remarkable amount of fortitude. (It’s not like Chambers has become a cult hero, or at least I hope not, but he has probably earned at least some grudging respect here. I mean, 47 days.)

Harrington’s statement itself alluded to the public-relations angle:

Deputy Chief Constable BJ Harrington said: “Police forces have a legal and ethical responsibility for the welfare of anyone brought in to police custody. Although an investigation concerning the supply of Class A drugs is routine for our officers, there have in this case been some highly unusual circumstances [!] which have attracted [inter]national attention.

On the basis of all the medical evidence in this case it is most appropriate, both in the interests of Mr Chambers and of justice, to ensure he receives the hospital treatment he needs.

The police tried to salvage something from the debacle by arguing that Chambers’ example should still deter wrongdoers. “We will … not shy away from talking about the unpleasant truths that go hand in hand with the drug dealing lifestyle,” Harrington said, “from the violence often perpetrated by those involved to the expectation on dealers to ‘plug’ drugs to avoid capture.” Fair enough. But it seems unlikely they’ll be starting any more hashtags to draw attention to such cases in the future, and certainly not if they cross paths with Mr. Chambers again. He has shown he is not to be trifled with.