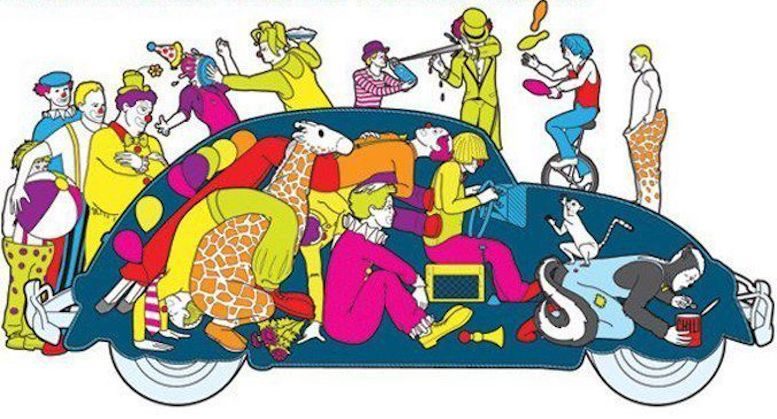 According to Car and Driver (Mar. 2011), the clown-car gag involves regular-sized clowns.

In my view, there seems to be some unfairness in the case of a Pennsylvania man who could serve up to five years in prison for his attempts to deal with an apparent home invasion in 2016. While the 35-year-old did plead guilty to discharging a firearm in an occupied structure, the structure was his own apartment, no one was injured, and he said he had fired the shots only to drive out intruders:

Police were dispatched at 9:40 a.m. for a report of a man shooting a gun inside his home. When officers arrived, they found [the man] standing next to the house holding a shotgun and ordered him to put the gun on the ground.

[The man] told police that two small clowns were running around his apartment and he had shot at them.

Police searched the apartment but found no one inside, which apparently led them to suspect that there had never been any clowns at all.

There had been someone in the first-floor apartment at the time of the incident, but that person was not injured. It isn’t clear what sort of ammunition the man was using. Certainly some types could have posed a risk to the neighbor, but if trying to drive away clowns, especially tiny clowns, it seems more likely one would use birdshot or something of that kind.

That would still have been a violation, but it would have posed much less risk to neighbors than, say, grabbing a .38-caliber revolver and blasting away with that. See “One Wounded in Man-Bat Fracas,” Lowering the Bar (Sept. 2, 2010) (noting that man’s attempts to shoot an invading bat put at least three bullet holes in a nearby townhouse).

Then there’s the question about whether this crime really fits the statute. That would appear to be section 2707.1 of the Pennsylvania Statutes, a law that makes it an offense to “knowingly, intentionally, or recklessly discharge[ ] a firearm from any location into an occupied structure.” According to the report, while the man was found outside the house, he was only accused of firing shots (at tiny clowns) while inside it. I guess you could construe “any location” to include a location inside the same occupied structure, though that seems like a stretch to me. But maybe he was charged with reckless endangerment (section 2705) and pleaded to this lesser charge. That’s just one of the questions left unanswered about this incident, unfortunately.

It’s a little reminiscent of the 2011 case in which an Arizona man got jail time for “discharging a firearm within city limits with criminal negligence” just because he put a few rounds into his old Camaro after it refused to start. There was no evidence he had put anyone else at risk, so far as I could tell, although I suppose the bullets could have ricocheted off the engine block. I just felt that in the absence of any evidence that others were in danger, the man should have been able to execute his Camaro if it had failed him one too many times. Or for any reason. Camaros don’t have rights.

Clowns do, but again police found no evidence of any clown involvement in the Pennsylvania incident. According to the report, while police were questioning the man, he “pointed next door and said he still saw clowns on the neighbor’s roof, but officers did not see any.” It seems doubtful that they looked very closely, though, so the clowns may have gotten away with something here.

TIP: Lawyer Who Sleeps for “Substantial Portion” of Trial Is Ineffective