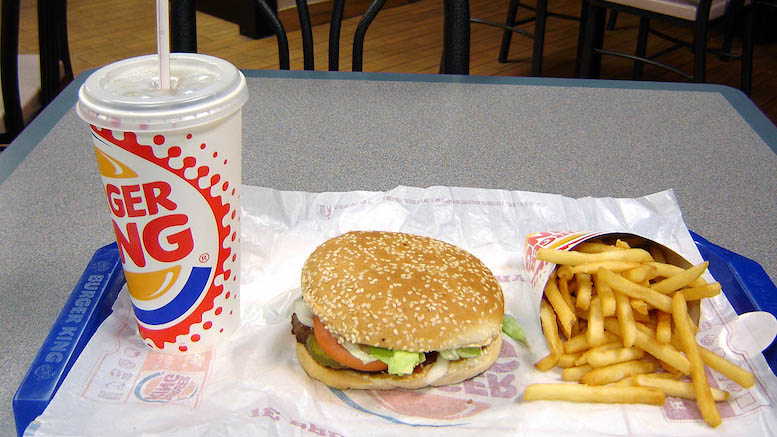 Technically, the present value of 1,114 of these

At least this isn’t one of those cases where somebody suffers a fairly trivial injury and then seeks excessive damages (though I should clarify that around here “excessive damages” usually means a number with not less than 16 digits). No, Curtis Brooner is only seeking $9,026.16. That is still a lot given the nature of the alleged injury, namely being locked for an hour in the bathroom of a Burger King in Wood Village, Oregon. But a demand of less than $10k normally wouldn’t even be worth mentioning.

Here, though, it’s not the amount but how it was calculated: Mr. Brooner is demanding the equivalent of one Whopper meal per week for the duration of his remaining life expectancy, which he and his attorney estimate will be another 22 years.

In an apparent effort to show they’re being reasonable, they say they have already taken the effect of cumulative Whopper consumption into account. “We determined his life would last 72 years,”  the lawyer said, “which is about five years less than average based on his frequent consumption of cheeseburgers.”

According to the report, Brooner visited the BK on December 15, used the restroom, and when he tried to leave the door wouldn’t open. Employees passed a flyswatter under the door so he could try to jimmy the door open, but that not only failed, Brooner cut his hand in the attempt. A locksmith had to be called to free him, and all told Brooner apparently spent about an hour more in the bathroom than he had intended.

Though the demand only has six digits, and two of those follow a decimal point, it’s still a lot just for spending an hour stuck in a restroom. But Brooner’s lawsuit makes an effort to argue that the experience was worse than it sounds. “Court documents claim employees … laughed at Brooner while he was stuck in the restroom,” for one thing, so there was some emotional distress involved. There is also a suggestion that the condition of the restroom in which Brooner was imprisoned left something to be desired. “[T]here is nothing funny about being locked in a dank bathroom for an hour,” Brooner’s lawyer said, incorrectly, and he also failed to acknowledge the possibility that Brooner might have contributed to the dankness himself.

If so, that might affect what he could recover if he is suing for negligence (I haven’t seen the complaint).  Under Oregon law, a plaintiff’s own contributory negligence usually does not bar recovery but “any damages allowed shall be diminished in the proportion to the percentage of fault attributable to the claimant.” Brooner probably could not have caused the imprisonment itself, unless the dankness level was so high it caused the door to swell; but in that event it seems unlikely he could have survived for an hour in such a hell of his own creation. So probably we are only talking about a modest reduction in the amount of dankness damages, if any.

But Brooner may not be asserting a tort claim at all—from the report, it sounds like breach of contract. After being freed, Brooner spent some time in the restaurant “just [re]gaining his composure,” and during that time he says the manager offered him compensation. “To make things right,” his lawyer asserted, the manager “offered him free food for the rest of his life should he come into the restaurant.” He accepted, and alleges that the restaurant in fact honored this deal for the next few weeks. After that, a regional manager canceled it. This seems to be why the demand is based on Whoppers for life. “My client was presented with an offer,” the lawyer said, “he accepted it, and a deal was a deal.”

Well, probably not. There’s nothing in the report about Brooner having made a demand first—probably because he hadn’t suffered any significant harm, so no one expected him to sue, including him—and so the manager’s offer sounds more like a gratuitous one that couldn’t be “accepted” in order to form a binding contract. Put another way, if Brooner didn’t have a real claim to begin with, then he didn’t really give up anything in exchange for the alleged “Whoppers for life” deal, so there would be no consideration and no contract. It also seems like Brooner might have difficulty proving that the offer was really “for life.” I mean, it doesn’t sound like they sat down and wrote out a settlement agreement.

I’m also now remembering (but not actually researching, so be warned) something called the “statute of frauds” that requires a contract to be in writing in certain circumstances. Sales of real property have to be in writing, for example, and I’m vaguely recalling that this is also true for contracts that cannot be performed within a limited (or definite) period of time. If so, then this would not be enforceable if it wasn’t in writing, because while Brooner’s lawyer may expect him to live another 22 years, there’s obviously no way to know. It’d be an open-ended commitment and so not enforceable (I think) unless the terms were written down.

In any event, there will most likely be some sort of a written settlement agreement now, in anticipation of which Brooner is just throwing a number out there as a starting point for negotiations. And I suppose that in that sense, this number is as good as any other.

Lowering the Bar in Chicago