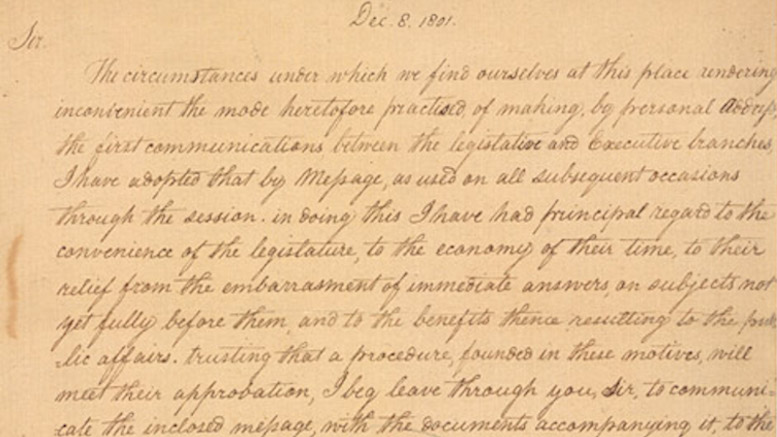 As CNN reports, Nancy Pelosi has sent the President a letter saying that, what with the government shut down and all, it won’t be possible for him to come over and regale Congress with the State of the Union address he had previously been invited to give:

Sadly, given the security concerns and unless government re-opens this week, I suggest we work together to determine another suitable date after government has re-opened for this address or for you to consider delivering your State of the Union address in writing to the Congress on January 29.

Obviously, she framed this as a request, but it isn’t. And while the State of the Union speech has become a big stupid spectacle in the last few decades, for much of our history nobody even bothered with a speech. It was better that way.

The Constitution says only that the President “shall from time to time give to the Congress Information of the State of the Union, and recommend to their Consideration such Measures as he shall judge necessary and expedient….” U.S. Const. art. II, § 3, cl. 1. That’s it. All it says is that the President has the obligation (and the implied power) to make recommendations. George Washington interpreted this to mean he should actually walk over to Congress once a year and tell them about stuff in person, which he first did on January 8, 1790. Here are selections from that first Annual Address:

Fellow-Citizens of the Senate and House of Representatives:

I embrace with great satisfaction the opportunity which now presents itself of congratulating you on the present favorable prospects of our public affairs. The … rising credit and respectability of our country, the general and increasing good will toward the government of the Union, and the concord, peace, and plenty with which we are blessed are circumstances auspicious in an eminent degree to our national prosperity. Indeed, the auspices are so favorable that only with a supreme national effort could future generations manage to f*ck up this great opportunity our sacrifices have all but guaranteed to them.

In foreign affairs, the interests of the United States require that our intercourse with other nations should be facilitated by such provisions as will enable me to fulfill my duty in that respect in the manner which circumstances may render most conducive to the public good. That, gentlemen, is why I ate my translator’s notes following my meeting with the emissary of Her Excellency Catherine II, Empress of All the Russias; any suggestion of other motive has been crafted from whole cloth. I am no puppet. You, sir, are the puppet, if puppet there be.

John Adams continued this tradition, though with slightly less profanity. But when it was Thomas Jefferson’s turn, he decided to give Congress his information only in writing, explaining in this cover letter that he felt it would be inconvenient at that juncture to do so. (He also said doing this would relieve legislators “from the embarrassment of immediate answers on subjects not yet fully before them,” which I’m pretty sure is an insult, though a very polite one.)

And maybe it was, but Jefferson also felt that the whole idea of having the Executive appear to address the Legislature in this manner was just a little too monarchical for what we still believed at the time was a republic. Following Jefferson’s example, annual messages were usually sent only in writing until 1913, when Woodrow Wilson decided to show up personally again.

And it has been all downhill from there.

Anybody who has watched a State of the Union (as it’s now called) knows, or should know, what a big farce it has become. All three branches of government show up (even though the Constitution doesn’t invite the Judiciary at all—party crashers) and the President makes this big procession down the aisle during which members of his party worship him and everybody at least feels obligated to applaud. The President then makes an imperial-style speech that provides little if any actual information, and in the worst of all recent traditions, now always calls attention to some individual citizen who has been invited supposedly for praise but really so the President can bathe in his or her reflected glory. It’s all more than enough to make Thomas Jefferson hurl.

The last thing we need in this country is more president-worship, no matter who’s president, so the whole tradition should be canceled. But a “State of the Union” address would be especially ridiculous at the moment. Trump’s not going to embarrass anybody with his superior knowledge on subjects not immediately before them, but there’s no reason to give him another opportunity to lie about the border “crisis” like he did for eight minutes the other night, or about his feelings on puppetry. And, to get back to Pelosi’s letter, a president doesn’t have the right to give his state-of-the-union info in any particular way, much less the right to some grand processional. That is just a tradition that’s developed, and Donald Trump can hardly complain if somebody wants to dump on a tradition he likes. Since this tradition sucks anyway, now’s as good a time as any to dump on it.

As I believe George Washington said about the British Empire, though I may be misremembering that quote too.

Court Rejects Unabomber’s Request to Get Unabombing Stuff Back