This post at Wired magazine presents a few good examples of dopey warning cases, including the famous hot-coffee lawsuit; the one accusing Apple of failing to warn that if you turn the volume up too high on your iPod, you might damage your hearing; and the Dunne case, in which a divided appellate panel held that a 500-pound woman could sue for injuries she sustained after she crushed an exercise bike (it apparently lasted only "three or four rotations" before collapsing). 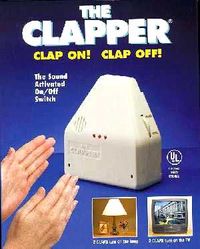 I knew about those, but was not aware of Hubbs v. Joseph Enterprises, in which the plaintiff managed to injure herself when attempting to activate "The Clapper," the famous as-seen-on-TV device that promised to permanently eliminate that tiresome chore of actually crossing a room and operating a light switch.

(Full disclosure: I once owned a similar device, but it was a keychain model that was great for finding lost car keys. Not so great if you're trying to hide from someone who knows you have it. Just throwing that out there.)

Ms. Hubbs argued The Clapper was defective and that the manufacturer failed to warn that one could injure oneself by banging one's hands together in an action commonly referred to as "clapping." Although Ms. Hubbs was 80 years old, the court noted that The Clapper's manual stated that "[s]enior citizens or handicapped persons who find clapping difficult may prefer to use an inexpensive clicker (cricket), available at most novelty retailers." That's not quite a warning of danger, but the court held it was close enough.

As for the defect allegations, the court rejected those for two reasons.  First, plaintiff admitted that the device had a sensitivity control that she had failed to adjust. Second, the court did not believe plaintiff's injuries had been caused by a defect (or by a failure to warn), "but were, rather, the sole result of plaintiff's deliberate act of attempting one last 'extra hard' clap after repeated prior efforts had failed to activate the device."

I have a vague memory of learning about the "one last clap" rule in torts class, but then most of my memories of that class are a little vague.