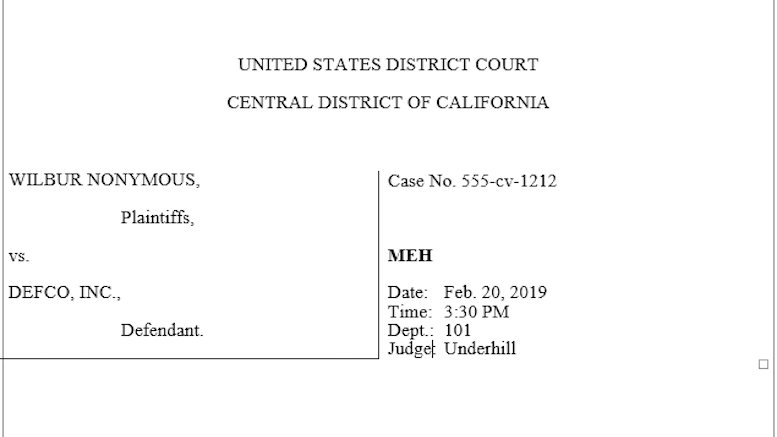 I was going to call this post “Why We Proofread #1376,” but then I didn’t. For one thing, I don’t actually have a series going on that topic, though maybe I should start one. Certainly there are plenty of examples, many of which caused or at least should have caused far more embarrassment than this:

But second, I’m not sure this really resulted from a failure to proofread, as that headline would’ve implied. Because having looked over the rest of this document, I think the author—likely the judge’s law clerk—almost certainly did proofread. This is not a poorly written, sloppy order littered with typos. At first glance, in fact, I didn’t see any at all (and I am good at seeing them). Sure, there were some arguably missing hyphens and the author insists on using two spaces after a period, but we aren’t putting people up against a wall for those things yet. (After I take power and declare a National Grammatical Emergency, though, which I will do at the earliest opportunity, heads will roll.) So actually, this is a pretty clean document.

Of course, it does have this one issue.

I’m going to speculate that the author may have missed this one, despite catching all the others, because he or she had embedded it in parentheses. That made it look like the sort of parentheticals that follow so many case citations in legal documents, and that really shouldn’t follow so many case citations because—as this example may demonstrate—people often don’t read what’s in them. Or it may just be that it looked like a continuation of the previous parenthetical, and the author missed it for that reason. In that case, the lesson would be more that it’s much better to set off comments to yourself in brackets or with highlighting, or using some other method to make sure you won’t overlook them later. I don’t do this, of course, because as you know I don’t make mistakes. But most people should consider it.

Not only did the author proofread, this particular mistake at least shows that he or she was trying to be conscientious, not lazy. As it happens, I think the cited case is a perfectly good statement of the rule at issue there, so “meh I need a better rule statement” might mean only that they wanted to find something more recent or from a higher court. Regardless, it means the person was trying to improve something that was already at least adequate. That’s a good thing.

It may or may not make the author feel any better, but it’s something.

By the way, if there are any typos in this post, or for that matter any of the other 3,500+ on this site, I put them there deliberately for you to find. You know, as an exercise.