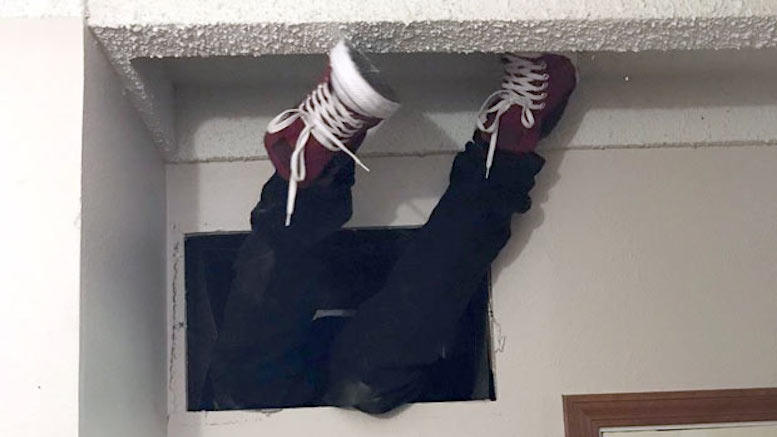 Had a couple of good prospects today up near the top of my insanely long list of things to write about. One was a followup to my recent post on the legal-ethics issues raised by an alleged raccoon murder (see “Is It Unethical to Throw a Raccoon Overboard?” (May 24, 2019)), which involves answering a question many readers have posed about that case, namely, whether state laws or ethics rules would apply to a raccoon murder committed in international waters, a relatively complicated and time-consuming question that requires an analysis of jurisdictional issues at the intersection of federal, state, and international law.

The other was this one.

On June 6, sources reported that deputies in Thurston County, Washington, had located a man who had fled inside a house after being told there was a warrant for his arrest. For some reason, I can’t not analyze whether the initial stop was legal, something that’s not entirely clear from the report. It says the deputies were “looking into a case involving a wanted subject for trafficking stolen property” when they “encountered two individuals outside a home.” That sounds entirely random, but it might have been the wanted subject’s home. Still, being outside a wanted subject’s home isn’t against the law. One of the deputies said the men “were being pretty verbal with us and wouldn’t provide us with information for who they were.” Whatever verbs they used, that wasn’t illegal, either; and so far as I can tell, Washington is one of the states where you’re not required to provide ID unless you’re driving or (according to the ACLU) in “certain cases involving alcohol or marijuana.” No suggestion any of that was involved here.

But, the deputy continued, “I was able to find their booking photos through our jail system and determined that both of them had felony warrants.” Hm. That might mean he took pictures of the “individuals,” which would have been perfectly legal if they were out in public, and then the “jail system” was able to do a reverse image search or something and come up with matching booking photos and associated warrants. I am a little skeptical, but I suppose this is possible.

If so, then they of course could detain the individuals based on the outstanding warrants, and pursue them if they tried to flee. Arguably, they could have pursued this guy into the house immediately under the “exigent circumstances” exception, but they didn’t. Instead, they got a warrant. This took at least 45 minutes, which gave the individual time to hide.

“Once inside the home, however, no one could be found,” even after a room-by-room search. Eventually, a deputy opened a door to a small area where the heater was located, and this happened:

“Right away I saw a chunk of flesh [still attached—”bulge” would have been a better word choice] where his body had blown open the duct work, and I could see the stripes where his Calvin Klein underwear was hanging out,” [the deputy] said. “So I called him by his name and asked if he was OK. It took him a while, and all he said was ‘Hey bro, I can’t breathe.’”

The individual, who is said to be 6′ 5″ tall, had somehow stuffed himself into the duct and an accomplice had screwed the cover on behind him, thusly: 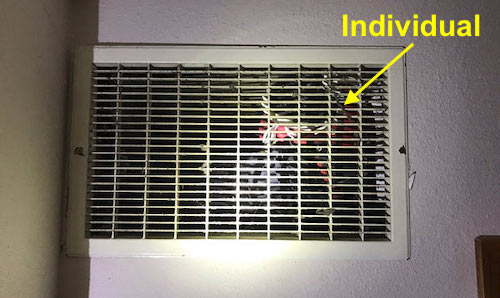 That person had managed to leave the scene, and so if police hadn’t found Individual when they did, who knows how long he’d have been in there or whether he’d have survived (see “Hey bro, I can’t breathe,” supra). Luckily for him, it didn’t take that long to get a search warrant.

The photos above were originally posted to the Thurston County Sheriff’s Twitter account (“TCSO=1 Suspect=0”). I have spared you the one in which the aforementioned stripes of Individual’s Calvin Kleins (and a couple “chunks” of flesh) can be seen as he is hauled out of the vent, but you may view it here if you wish.